Warner - who is popular in India due to his IPL performances said that the government's decision should be respected and followed.

In the wake of the TikTok ban in India – Australian opener David Warner – who has become popular on the Chinese App responded to a fan on social media who asked him about his reaction on the move by the Indian government. Warner – who is popular in India due to his IPL performances said that the government’s decision should be respected and followed.Also Read - TikTok Likely to Return to India as TickTock, Trademark Application By ByteDance Drops Big Hint

The 33-year-old replied to the user and wrote, “They are indeed but I can’t do anything about it being banned from India. That’s the government’s decision and people in India have to respect that.” Also Read - Babar Azam Overtakes Hashim Amla, Virat Kohli to Become Fastest to Score 14 ODI Centuries 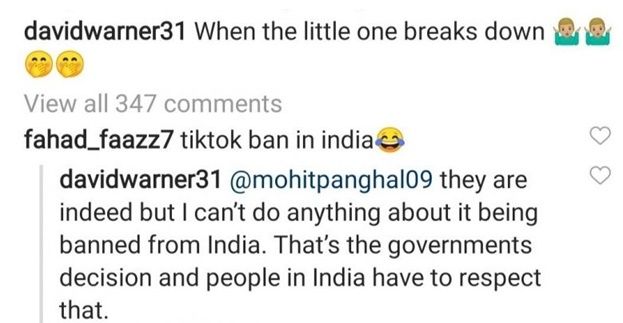 A few days ago, after the stand-off with China in Ladakh, where 20 Indian soldiers were martyred, the Indian government banned 59 Chinese applications that were being used by Indian users. Also Read - Australian Cricketers May be Stuck in Quarantine During First Home Test

Meanwhile, Warner has been keeping himself busy during the lockdown by creating hilarious TikTok videos along with his wife and kids.

Warner – who last played a cricket game against New Zealand in March before the lockdown stopped all cricketing matches – was set to feature in the cash-rich Indian Premier League which has now been postponed indefinitely due to the pandemic and there is no certainty about when the T20 tournament will take place.

There are talks that the tournament could happen overseas but there is no confirmation on that. Warner – who led the SunRisers Hyderabad franchise to its first-ever IPL title in 2016 has been a prolific run-getter for his franchise and has bagged the Orange Cap on a number of occasions.