The much-awaited World Test Championship final finally resumed as the Sun came out on Saturday. New Zealand won the toss and opted to bowl first looking to make the most of the overcast conditions. But dashing Williamson’s hopes were India openers – Rohit Sharma and Shubman Gill – who ensured India did not lose a wicket in the first hour.Also Read - DC Predicted Playing 11 vs SRH IPL 2021 Match 33: With Shreyas Iyer Fit, Will Steve Smith Miss Out?

There were a couple of stoppages on Day 2, due to rain and bad light. At the end of the day, India was 146 for three with Kohli on 44*, while Rahane was unbeaten on 29. It was competitive as long as it lasted, and finally, the players had to come off the field due to bad light. 64.4 overs were bowled on Day 2 of the historic Test. Also Read - IPL 2021: Virender Sehwag on Why Mayank Agarwal Could be Blamed After PBKS Lose to RR

As per the Southampton Weather forecast, there’s 50% chance of rain on Sunday morning hence WTC 2021 Day 3 start could be delayed. Also, there is a chance of rain in the afternoon and even bad light can play a spoilsport. Also Read - SRH Predicted Playing 11 vs DC, IPL 2021 Match 33: David Warner Returns to Replace Jonny Bairstow? 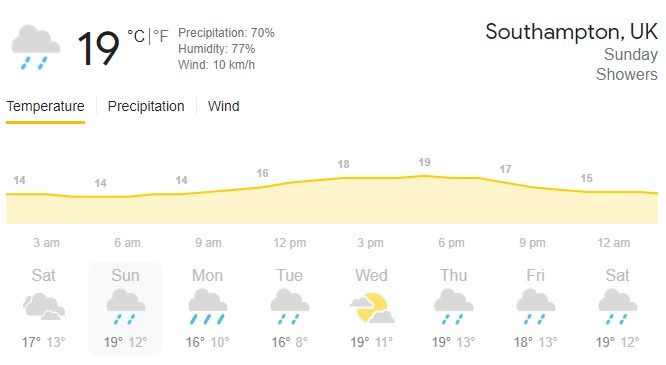 In case the game does not end in five days, the match will enter the reserve day. If rain plays spoilsport, the first priority will be to finish the game within five days by adding some extra overs to the gameplay if the conditions are suitable. The reserve day will not take place in case of completion of overs and at the same time match will end in a draw. Both teams will be declared as co-winners in that case and the reward money will be distributed equally.

“In the event of time being lost during the match, the ICC match referee will regularly update the teams and media about the way in which the reserve day may be used. The final decision on whether the reserve day needs to be used will be announced at the scheduled start of the last hour on the fifth day,” an ICC statement said.