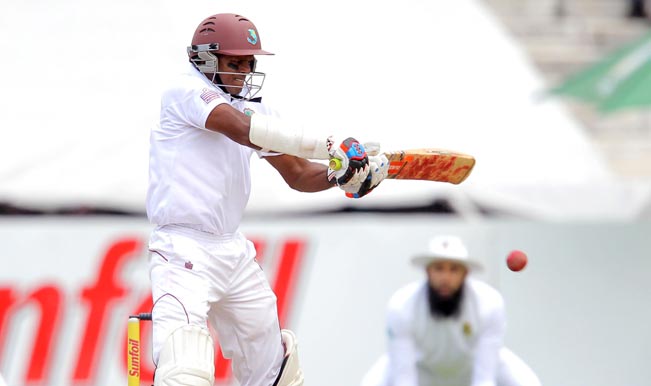 Port of Spain (Trinidad), May 27: Former West Indies Players Association (WIPA) president Dinanath Ramnarine has blasted the Clive Lloyd-led selection panel for dropping veteran batsman Shivnarine Chanderpaul ahead of the Australia series. Ramnarine criticised Chanderpaul’s exclusion from the 12-man squad, saying it was “disgraceful” and the manner in which the Guyanese cricketer was dropped was unbecoming of the selectors, reports CMC. Also Read - Eng vs WI: Ben Stokes vs Jason Holder Will Decide The 1st Test, Says Phil Simmons

“It was most unfortunate that the selectors would treat yet another great West Indies cricketer who has been a loyal servant in the most disgraceful manner,” Ramnarine said. Also Read - Phil Simmons Has The Full Backing of Cricket West Indies: Ricky Skerritt

New West Indies head coach Phil Simmons had said he did not believe the 40-year-old Chanderpaul was treated shabbily and that selectors did not see it fitting to pick him simply to offer him a farewell series. But Ramnarine insisted that Chanderpaul’s axing is in line with how the West Indies Cricket Board (WICB) has been treating great players.

“When I saw recently WICB president Dave Cameron say that Chanderpaul would be given a special send-off, I was waiting to see what would be done to celebrate his long-standing and successful career. But then I saw the team and Chanderpaul was left out. It is so consistent with the WICB, how they have treated great players in the past, including Brian Lara, Vivian Richards, Desmond Haynes,” said Ramnarine.

Ramnarine recalled that other top cricketers like Steve Waugh, Shane Warne, and Sachin Tendulkar were given the opportunity to play their final game in front of home crowds. He also cited the example of English Premier League footballer Steven Gerrard of Liverpool whose fans got an opportunity to say goodbye recently.

“The WICB missed an opportunity to make this series a send-off for Chanderpaul, lost another opportunity to build back trust with fans and to celebrate Chanderpaul’s career for being the dependable batsman that he was. What is important is that he came from humble beginnings and achieved and the WICB should have used that as a motivating factor to the younger players to show that if Chanderpaul was able to make it at highest level and succeed then everyone can,” Ramnarine said.

The West Indies and Australia play two Tests, the first starting at Windsor Park in Dominica on June 3 and the second bowling off at Sabina Park in Jamaica on June 11.