Ball-tempering: Currently, the maximum sanction under a Level 2 charge is ban of one Test or two ODIs, while under Level 3, a player is slapped with a ban of four Tests or eight ODIs.

The ill-omen of ball-tampering seems to have rocked the international cricket fraternity once again — the recent incident including Sri Lanka Test skipper Dinesh Chandimal. The episode occurred on the third day of the ongoing second Test between Sri Lanka and West Indies in St.Lucia when on-field umpires Aleem Dar and Ian Gould, and third umpire Richard Kettleborough, charged Chandimal on Saturday for changing the condition of the ball in breach of clause 41.3 of the ICC Standard Test Match, ODI and T20I playing conditions.Also Read - Sri Lanka Reopens Borders With India, Starts Regular Flights From 9 Indian Cities. Full Details

The charges were laid by the officials after the television footage from the final session’s play on Friday appeared to show the Sri Lanka captain taking sweets out from his left pocket and putting these in his mouth, before applying the artificial substance to the ball which the umpires viewed as an attempt to change its condition. Video evidence will be used during the hearing held by the match referee which will also be attended by the match officials as well as members of the Sri Lanka team management. Also Read - IPL 2021 | Wanindu Hasaranga is Phenomenal Inclusion For RCB: Aakash Chopra

“Sri Lanka captain Dinesh Chandimal has been charged for breaching Level 2.2.9 of the ICC Code of Conduct. More details to follow in due course,” the ICC said in a statement on Twitter.  Article 2.2.9 of the ICC’s code of conduct relates to changing the condition of the ball in breach of clause 41.3 of the ICC Standard Test Match, ODI and T20I playing conditions. Also Read - Indian Fishermen Attacked By Sri Lankan Navy At Katchatheevu Island: TN Officials

Unlike Cameron Bancroft and Steve Smith, Chandimal has pleaded not guilty to ball-tampering charges and a hearing will now take place into the episode after the conclusion of the match and before the start of the 2nd Test. The Sri Lanka players had taken to the field two hours after the scheduled start of play on the third day as a mark of protest. Sri Lanka Cricket (SLC) also came to defence of its captain, saying it would defend any “unwarranted allegation” against any player. Chandimal  is currently standing to lose as many as two suspension points, which could see him miss the third Test.

ICC chief executive David Richardson told ESPNcricinfo that the cricket committee “viewed” ball tampering as “cheating” which went against the spirit of cricket. “… Therefore, they (committee) were very strong that we need to increase the sanctions available for that type of conduct,” Richardson said. “So we are talking moving both ball tampering and personal abuse, foul language upto Level 3.”

In the last few months, the ball-tampering saga has been creating headlines more than the ‘gentlemen’s game’ itself. Earlier this year, Australia captain Steve Smith, alongside vice captain David Warner and Cameron Bancroft were charged of tampering with the ball during the second Test against South Africa. The entire incident was caught on camera as Bancroft was seen using a sandpaper on the ball.

Smith, alongside Bancroft, had admitted in the post-day press conference that it was a deliberate and pre-planned attempt and the leadership group were aware of it. Smith and were removed as captain and vice-captain respectively in the middle of the Test match. They were also banned for one Test match by the ICC. Bancroft got away with three demerit points by Cricket Australia (CA) handed him a nine-month ban. Smith and Warner were handed over with one-year bans by the country’s cricket board. 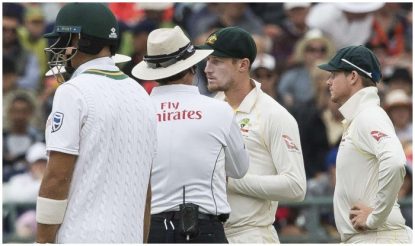 Both the incidents have once again raised an important question-Is the punishment given by the ICC harsh enough to create fear in the minds of the cricketers before they resort to such stuff? Following the Bancroft incident, the ICC had in April asked an internal panel to suggest harsher punishment for ball-tampering and other misbehaviour by players after the meeting of the Cricket Committee, chaired by former India captain Anil Kumble.

Currently, the maximum sanction under a Level 2 charge is ban of one Test or two ODIs, while under Level 3, a player is slapped with a ban of four Tests or eight ODIs. “All level 2 breaches carry an imposition of a fine between 50 per cent to 100 percent of the applicable match fee and/or up to two suspension points, and three or four demerit points,” the statement added.

Smaller punishments have been there in ball tempering incidents whether it was Rahul Dravid applying lozenge in Zimbabwe, Shahid Afridi biting the ball, Mike Atherton’s pocket full of dirt, Marcus Trescothicks’ Murray mints, Faf du Plessis’ zipper + mints, Stuart Broad’s stamping, Jimmy Anderson’s handling or Pat Symcox’s icky cocktail of sweat-and-spit. The maximum punishment that has been till date given by the ICC is to former Pakistan skipper Inzamam ul-Haq who was banned for four Tests in 2006 when his side was accused of tampering with the ball by umpires Darrell Hair and Billy Doctrove during the Oval Test.