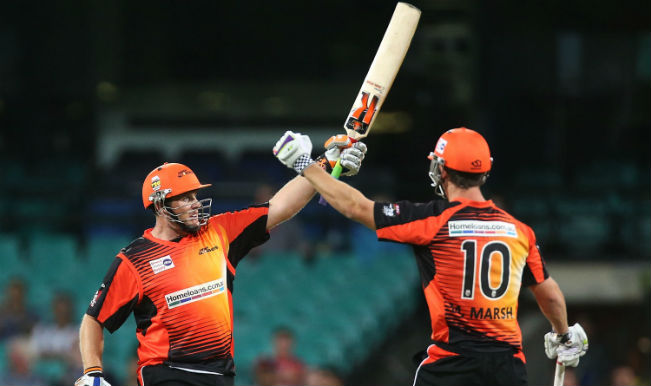 Dolphins (DOL) from South Africa are set to take on Big Bash League (BBL) winners Perth Scorchers (PRS) in Group A Match 4 of Champions League T20 (CLT20) 2014 at Mohali on Saturday. The tournament has already got off to an exciting start with three matches done. In Group A,  Kolkata Knight Riders beat Chennai Super Kings in the opening match. Check the Points Table of the Group Stage of Champions League T20 2014 (CLT20) Also Read - HORRIBLE! Bengal Men Torture Gangetic Dolphin to Death on Banks of River Hooghly, Viral Video Sparks Fury on Twitter

Dolphins has a good mix of players for any T20 side with some of the best outfielders in the side. However, the absence of David Miller and Lonwabe Tsotsobe means that Dolphins will have to without the services of their best batsman and bowler. In this case, the role of Morne van Wyk and Kyle Abbott becomes all the more crucial. The duo will have to play a key role for the side to have any chance of qualifying through to the next round. Morne van Wyk will be the key player for Dolphins. The wicketkeeper-batsmen’s exploits with the bat in T20 cricket remains a well known fact and he can destroy any attack on his day. But the pressure will be immense on van Wyk to take the burden of helping his side post huge totals on the board. Also Read: Champions League T20 2014: Complete squads of all teams of CLT20 2014 Also Read - CC vs DOL Dream11 Team Prediction, Momentum One-Day Cup 2020, Match 14: Captain And Vice-Captain, Fantasy Cricket Tips Cape Cobras vs Dolphins at Newlands, Cape Town 5:00 PM IST

On the other hand for Perth Scorchers even as they will be without the services of Simon Katich and Shaun Marsh, the experience of Brad Hogg and Yasir Arafat will hold the side in good stead in the upcoming T20 extravaganza. While the opening might be a bit dicey, Adam Voges and Sam Whitman provide power and stability to the middle-order. The side also has a flurry of all-rounders to bank on. The likes of Ashton Agar, Yasir Arafat, Ashton Turner, Hilton Cartwright, Mitchell Marsh and Nathan Coulter-Nile are equally effective with the bat and ball which allows the side to have flexibility in the line-up. Michael Beer is a good spin option to have alongside the veteran left-armer Brad Hogg. Champions League T20 2014 Schedule: All Match Fixtures and Complete Time Table of CLT20 2014