John Terry and Kyle Walker's Own Goal gave Chelsea a 2-0 win over Tottenham Hotspur in the League Cup Final. 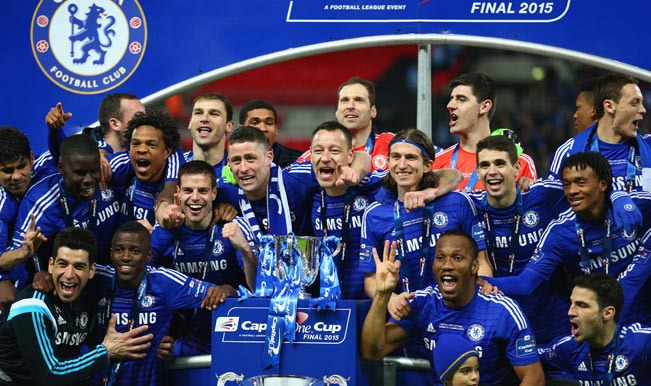 Chelsea secured their first trophy under Jose Mourinho’s second stint as manager with a 2-0 win over Tottenham Hotspur in the Capital One Cup 2014-15 final on Sunday. John Terry struck on the cusp of half-time at the Wembley stadium and Diego Costa’s effort was guided past Hugo Lloris by Kyle Walker in the second-half to help the Blues lift the English League Cup for the fifth time. Also Read - Tottenham Hotspur Crush 10-Man Manchester United 6-1 to Inflict Joint-Worst Defeat at Old Trafford

Sunday started off brightly for Jose Mourinho as Liverpool beat Manchester City 2-1 to ensure his side’s five-point lead on top of the table remained intact. Additionally, The North London club came into this clash without managing a win in four competitive fixtures and suffering elimination from the Europa League at the hands of Fiorentina. Also Read - TOT vs CHE Dream11 Team Tips And Prediction English League Cup 2020-21: Captain, Fantasy Playing Tips And Predicted XIs For Today's Tottenham Hotspur vs Chelsea Football Match at Tottenham Hotspur Stadium 12.15 AM IST Wednesday September 30

Spurs had beaten their west London counterparts were managed by Avram Grant in the final back in 2008. However, history was not to repeat itself as Mourinho, who won this trophy twice during his first stint in charge of Chelsea, celebrated it as if it like he was a player.

Mauricio Pochettino’s side were on the backfoot right from the start as Terry headed over the crossbar following a free-kick in the first minute. Ramires then had his shot blocked as the clock ticked before Kurt Zouma failed to score his second goal of the competition. Spurs appeared to have found the swagger that saw them beat Chelsea 5-3 at the White Hart Lane on New Year’s Day as Christian Eriksen rattled the crossbar with a thundering free-kick in the 10th minute.

Chance after chance followed in the seconds that followed but no white shirt was able to slot the ball past Thibaut Courtois in Blues’ goal. A war between Diego Costa and Eric Dier appeared to be brewing with the pair clashing time and again. Spurs were punished for giving away free-kicks in dangerous areas. They failed to clear Willian’s delivery and the ball fell kindly for the Blues skipper to lash it home through a host of bodies.

Chelsea’s lead doubled when Costa received the ball from Cesc Fabregas – strolled past Kyle Walker – and his attempt to square the ball for a teammate was deflected by the right-back towards Lloris’ near post. Tottenham had the majority possession of the ball but the Blues’ defence put in a strong shift with Branislav Ivanovic making some timely interceptions to deny his opponents any chance on goal.

Spurs’ hero in recent matches Harry Kane looked completely off form as he lacked the service and precision to beat Courtois when he had the chance. Mourinho’s first trophy as Chelsea boss was the League Cup back in 2005 when his side beat Liverpool 3-2 In extra-time and it is indeed co-incidence that the Portuguese tactician once again lifts the same cup as his first silverware during his second-stint with the Stamford Bridge outfit.