Missing all the action, the players with most IPL appearances said that he cannot believe he is not there along with the team.

Suresh Raina – who pulled out of the IPL in UAE citing ‘personal reasons’ – wished the CSK franchise luck ahead of the tournament opener against defending champions Mumbai Indians on Saturday at the Shiekh Zayed Stadium, Abu Dhabi stadium. Missing all the action, the players with most IPL appearances said that he cannot believe he is not there along with the team. Also Read - IPL 2020 Points Table Today Latest Update After KKR vs KXIP, Match 46: Kings XI Punjab Move to Fourth Spot After Win Over Kolkata Knight Riders; KL Rahul Extends Lead Over Orange Cap, Mohammed Shami Grabs 2nd Spot in Purple Cap Tally

“Wishing you all the success boys @ChennaiIPL. Unimaginable for me that I’m not there today, but all my wishes are with you. Sending you all the good vibes! Go get it! #WhistlePodu,” Suresh Raina said in a social media post on Saturday. Also Read - SRH vs DC 11Wickets Fantasy Cricket Tips Dream11 IPL 2020: Pitch Report, Fantasy Playing Tips, Probable XIs For Today's Sunrisers Hyderabad vs Delhi Capitals T20 Match 47 at Dubai International Cricket Stadium 7.30 PM IST October 27 Tuesday 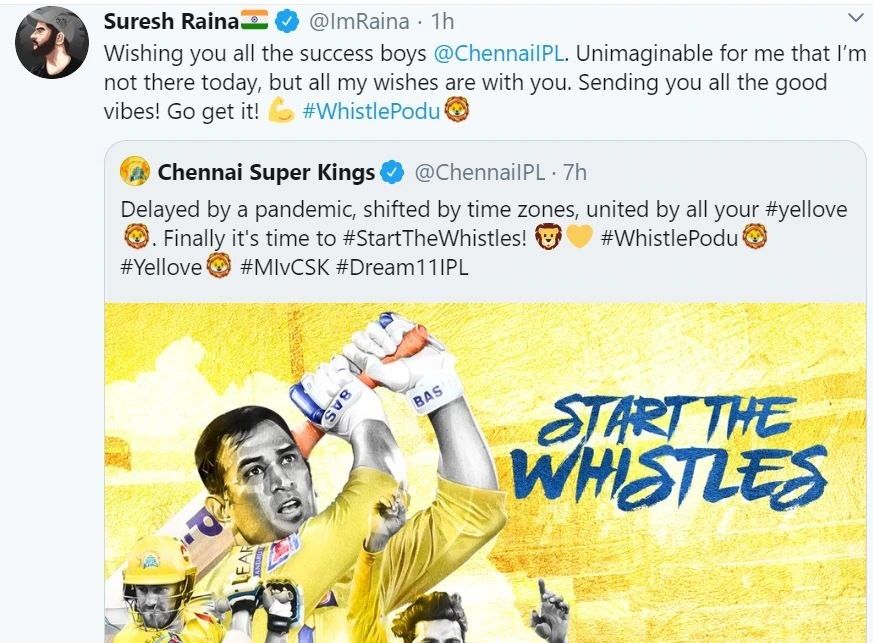 It would be interesting to see the impact CSK has after the loss of ace cricketer Raina. And who bats at the No 3 slot. CSK has not opted for an official replacement, reportedly they are looking at young Ruturaj Gaikwad would fill the big shoes. Also Read - IPL 2020 Live Streaming, SRH vs DC in Dubai: Predicted Playing XIs, Pitch Report, Toss Timing, Squads, Dubai Weather Forecast For Match 47

Eyes would be on MS Dhoni – who will be making a comeback to competitive cricket after 436 days. It would also be interesting to see the spinners Dhoni opts for at the start of the tournament.

MI would like to start their title defense with a win. While MI is strong in the batting department, CSK has spinners in their ranks who could prove to be game-changers in UAE.

With the temperatures expected to drop in the evening and the pitch getting slower by the day, it is highly expected that the team that wins the toss will opt to bat first. The toss will take place shortly.