It was a funny moment during day two of the Test. Stokes also reacted in a sheepish manner when he found Root had seen him.

English skipper Joe Root – who was at second slip – could not control his laughter after he saw Ben Stokes – who was beside him trying to hide the ‘brown stain’ in his trousers at Old Trafford, Manchester on Day 2 of the third Test against West Indies. Stokes was trying to hide it with his jumper but later chuckled himself as he knew everybody is watching.Also Read - Bhuvneshwar Kumar's Test Future to be Decided After Upcoming T20 World Cup: Report

It was a funny moment during day two of the Test. Stokes also reacted in a sheepish manner when he found Root had seen him. Also Read - VIDEO: MS Dhoni-Style No-Look Runout by Zimbabwe's Regis Chakabva Can be Watched on Loop

On Twitter, former English footballer Gary Lineker – who faced similar kind of embarrassment joined in the fun and wrote, “**** happens”. 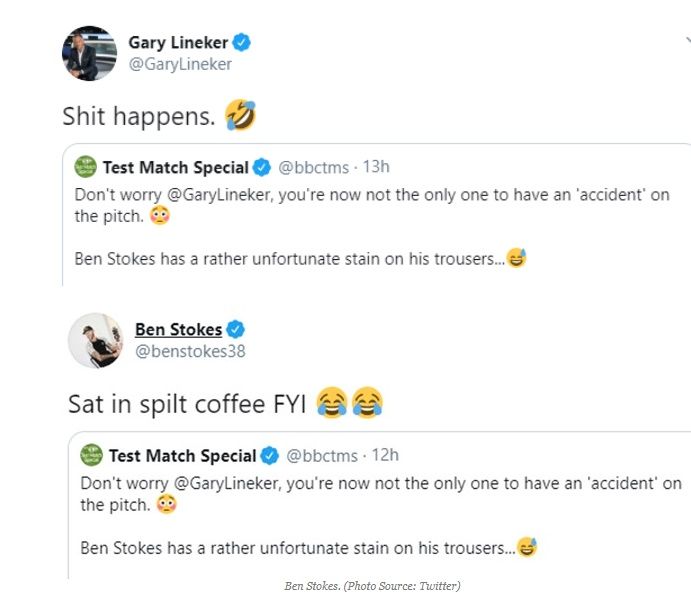 Meanwhile, the hosts are in the box seat after pacer Stuart Broad boosted England to 369 before the hosts’ seam attack caused problems for the visiting batsmen to leave the Windies 137/6 at stumps on day two.

Early wickets gave West Indies strong hopes of bowling England out for under 300, but a blistering 62 from Broad boosted them to 369. Carrying on the momentum, England seam attack caused problems for the visiting team to leave Windies 137/6 at stumps.