England and West Indies will lock horns in cricket’s fifth day-night Test on Thursday at Edgbaston. It will England’s first day-night Test match and apparently the first one to be played in Britain. Also Read - PAK vs BAN: Pakistan Propose Day-Night Test to Bangladesh in Karachi

Windies’ tour of England comprises of three Tests, with the first one being a pink ball affair. This will be the only fifth day-night game in the history of Test cricket. While England play their maiden Test with the pink ball, Windies have already played one. Also Read - Virat Kohli Agrees to Play Day-Night Test in Australia, Says 'Gabba or Perth, Doesn't Matter to us'

The Jason Holder-led side met Pakistan in October last year and lost the day-night Test by 56 runs. The other three Tests have been played in Australia. Interestingly, the hosts emerged victorious in all those matches. Also Read - Sourav Ganguly Picks Mumbai, Bangalore And Gujarat As Next Venues For India's Day/Night Tests

Australia’s third, fourth overall, day-night Test was played at Brisbane against Pakistan. The home side won the match by 39 runs in a closely fought contest.

Though there has been decent attendance in Tests in England, the organisers will be hoping more people turn towards the longest format of the game. It will be interesting to see how England respond to the pink ball. 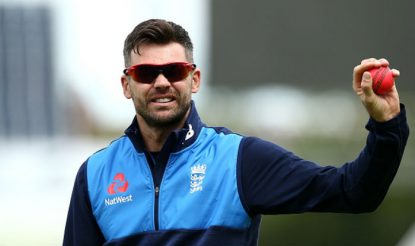 James Anderson during a nets session at Edgbaston | Getty Images

The Joe Root-led side come into the contest having defeated South Africa 3-1 in the four match Test series recently. Windies, on the other hand, have struggled across formats and will be hoping for a revival. Also Read- Security Company Hired by ICC to Visit Pakistan

The Caribbean side are ranked eighth in the Test rankings and have not won a single Test since 2000 in England. Last time, West Indies defeated England was in 2000 by an innings and 93 runs. Since then West Indies have played 17 Tests in England, losing 12 while five games ended as draws.