As England's cricketers went to practice at Old Trafford, assistant coach Paul Farbrace held up a whiteboard with the squad list written on it.

A couple of days ago, England’s starting 11 -line up for match against Panama was leaked following the pictures captured of assistant manager holding a sheet which had names of starting 11. Also Read - Gareth Southgate Effaces Rumours Regarding His England Departure

According to Mail Online, England’s  one-day cricket team have seen the funny side of their football counterparts’ brush with the media. Also Read - England Coach Gareth Southgate Heaps Praise on Raheem Sterling, Says he Can Become Captain

The publication of a proposed team line-up caused Gareth Southgate to ask whether or not the English media were in full support of his side at the World Cup. Also Read - Gareth Southgate, Harry Kane on Queen's List for Honors After World Cup Run

Heated debate has ensued on social media between broadcasters, journalists and ex-players about the role the press has to play. 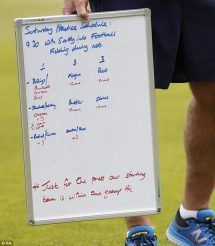 As England’s cricketers went to practice at Old Trafford, assistant coach Paul Farbrace held up a whiteboard with the squad list written on it.

It was captioned with: ‘Just for the press, our starting team is within this group.’

Sadly for the opponents Australia, knowing England’s side in advance has made little difference so far on this tour.

England are on the verge of a whitewash in the five-match series ahead of the final game at Old Trafford on Sunday.

Eoin Morgan’s side have been dominant in the series so far, particularly with the bat, and broke their own record for the highest ever ODI total.

They smashed 481 for six in the 242-run victory in the third ODI at Trent Bridge last week.