Former England captain Michael Vaughan and ex-spinner Graeme Swann said that Alastair Cook must be sacked as the One-Day International (ODI) captain for England to win the 2015 World Cup. 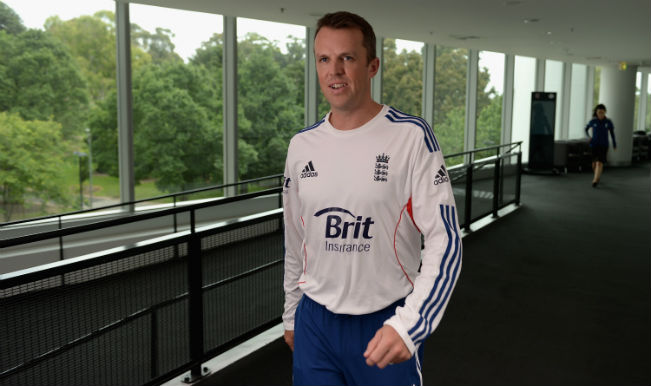 Also Read - Michael Vaughan: India Are The Best All-Round Side in The World Right Now

London, Aug 26: Former England captain Michael Vaughan and ex-spinner Graeme Swann said that Alastair Cook must be sacked as the One-Day International (ODI) captain for England to win the 2015 World Cup. Both Vaughan and Swann feel that the selectors are picking the ODI side on the basis of performance in Tests and that should stop immediately. Also Read - Michael Vaughan Trolls Himself After Rishabh Pant Helps India Beat Australia in Historic Gabba Test

“We pick one-day teams on Test form. Test form has made it easier for the selectors to have a more conservative selection than most people want to see,” Swann was quoted as saying by BBC’s Test Match Special.  “Alastair Cook is the most stubborn man in the world. He has almost backed himself into a corner where he’s got to carry on. I don’t think we’ve got a cat in hell’s chance of winning the World Cup.” Also Read - After Failing 157 Times, Man Finally Passes His Learner's Test for Driving

Vaughan, who captained England in the 2007 World Cup in the Caribbean, feels the team needs some big strikers up the order. “If you look at the last five England captains, Mike Atherton, Nasser Hussain, myself, Andrew Strauss and Alastair Cook, we are all Test players. We were all brought up playing the forward defensive and leaving it around the off stump. Occupying the crease, playing for a bit of time, and we were all one-day captains.”

“We’ve made the same mistake now as we did in my time, five to six years ago and in the 1990s. England are looking too much at these two new white balls. The other teams have gone for power at the top and all the way through. India have got strikers all the way down the order, South Africa and Australia the same. You need power at the top, in the middle and at the end,” Vaughan was quoted as saying by BBC Test Match Special.

Both Swann and Vaughan feel that young players must be selected in the ODI side. “I’ve just seen that the sponsors here are Royal London and the tagline on their adverts is ‘we’re so yesterday’ and they couldn’t sum up the England one-day team any more in my view. Some of my best mates – Cook, Ian Bell, Gary Ballance – are not one-day players who are going to win you a World Cup. Alex Hales is going to win you a World Cup, while James Vince, Jason Roy, Jos Buttler, Eoin Morgan are all players I wouldn’t want to bowl at, who can build a total of 360-370

“I love Alastair Cook dearly but I don’t think he should be bothering playing ODI cricket any more, he doesn’t need to. Even when I played I never thought we were a dynamic team compared to the teams we were playing against. When we got to No.1 in the world it was because we won 10 games in a row at home, not because we were in Australia beating them at home,” said Swann.