England recorded highest team total in One-Day Internationals (ODIs) at Trent Bridge against Pakistan in the third match of the series. Powered by Alex Hales’ 171, England scored 444 for three in their quota of 50 overs. England bettered Sri Lanka’s 443 for nine against Netherlands in 2006 to create the new world record. Also Catch- Pakistan vs England 3rd ODI 2016 Full Scorecard Also Read - Alex Hales Posts Picture of Poor Quality of Food Served to Him After Pakistan Super League Gets Postponed Due to Rise in COVID Cases

Opting to bat first England lost opener Jason Roy (15) in the sixth over with score reading 33 for one. Hales and Joe Root then continued to dominate the proceedings and played their shots with ease. Pakistan bowlers and fielders looked helpless as the duo kept scoring freely. Also Check- Pakistan vs England 3rd ODI 2016- As it Happened  Also Read - IPL 2021 Auction Full List: All Players Who Went Unsold

Hales after scoring his fourth ODI century went on to surpass Robin Smith’s unbeaten 167 against Australia in 1993 to set the new highest individual record for England in ODIs. Soon after reaching the milestone Hales fell to Hassan Ali. Hales finished with 171 off 122 balls including 22 fours and four sixes. Also Read - I Have Grown From my Mistakes And Would Love to Play For England Again: Alex Hales

With Hales’ departure came an end to the 248-run partnership between him and Joe Root for the second wicket. During this stand, Root registered his third consecutive half-century in the series. One over later after Hales was dismissed, Pakistan managed to pick Root’s wicket as well. And it looked like Pakistan might pull things back. Root was removed on an individual score of 85.

It was then the Jos Buttler and Eoin Morgan that helped England reach the record total. Buttler slammed a 22-ball half-century to dictate the terms. He was well supported by skipper Morgan as England surpassed their second 400-odd total in ODIs. 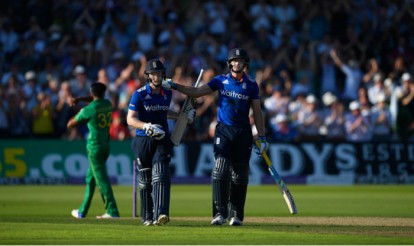 Buttler then finished unbeaten on 91 runs off just 51 balls. His innings comprised of seven fours and as many sixes. Morgan too scored an unbeaten half-century and ended with 27-ball 57, which included three fours and five huge sixes.

For Pakistan Hassan Ali and Mohammad Nawaz were the only wicket-takers. Hassan picked 74/2 while Nawaz chipped in with 62/1. Wahab Riaz gave away 110 runs from his quota of 10 overs to own the unwanted record. He now has second worst bowling figures in ODIs. Australia’s Mick Lewis holds the worst bowling figures in ODIs. He conceded 113/0 against South Africa in 2006.