Carlos Bacca netted a brace as Sevilla defended their Europa League title against Dnipro Dnipropetrovsk at the final in Poland. 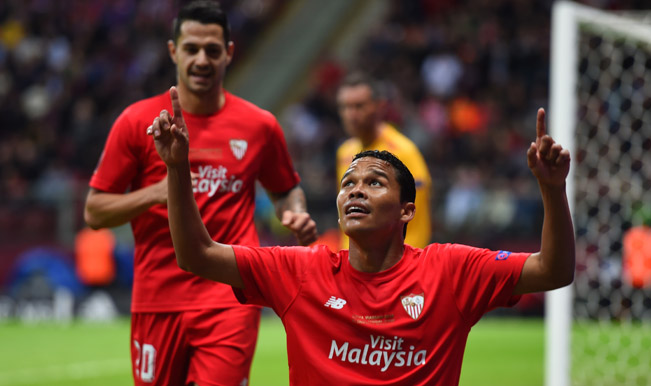 Warsaw, May 28: In a thrilling final match played at the Polish capital, Spanish football team, Sevilla defeated Ukrainian FC Dnipro Dnipropetrovsk 3-2 at the National Stadium on Wednesday night. In a fast and pacy match both teams scored twice before the interval. It was after 70 minutes Colombian striker Carols Bacca scored the winning goal for Sevilla. Also Read - RB Leipzig vs Man United: Solskjaer's Men Suffer 2-3 Defeat to Exit Champions League

This was his second goal of the match. Earlier Grezgorz Krychowiak, a Pole, playing for Sevilla scored the first goal which gave a boost to the local fans. It was an end-to-end battle for most of the match with Dnipro taking the early lead through Nikola Kalinic before Sevilla hit back with goals by Grzegorz Krychowiak and Bacca. Also Read - SEV vs RM Dream11 Team Tips And Predictions, La Liga: Football Prediction Tips For Today’s Sevilla vs Real Madrid on December 5, Saturday

However, the Ukrainian outfit’s skipper Ruslan Rotan restored parity just before half-time with a stunning free-kick. But Unai Emery’s side looked threatening and Bacca slammed home the winner in the 73rd minute. This was the fourth time that Sevilla has lifted the Europa League trophy which is a record for any team in the European continent. On the other hand Dnipro were playing in a continental tournament final for the first time. Also this is the first time that a team has retained the trophy ever since the format was re-branded in 2009.