Exclusive – I am Not a Guy Who Dwells Much on the Past: Former India Batsman Subramaniam Badrinath

In an exclusive chat with India.com, former India cricketer Subramaniam Badrinath spoke on a wide range of topics from his cricket career to how he surprised everyone by succeeding in T20 cricket.

When you win man-of-the-match award on T20I debut for India, it’s foolish to imagine that it will be your first and only game in the format. However, that is exactly what happened with Subarmaniam Badrinath who bailed India  against West Indies in 2011 but didn’t get to represent them again in T20Is. Also Read - Social Distancing, Thermal Screening: These Are Centre's Fresh SOPs For Restaurants, Hotels, Hospitality Units

He did play two Tests and seven ODIs but surely a little longer run before dropping him for good was expected. While his may overlook him for the limited-overs format but surely a first-class average of 54.49 merits much more than two Tests. Also Read - MS Dhoni Cuddling His Pet Dogs During COVID-19 Lockdown Will Melt Your Heart | WATCH VIDEO

But Badrinath isn’t the one to dwell on the past and has no regrets. India.com caught up with the former India batsman who is ready to begin another innings as an entrepreneur now. Also Read - Humans Start Defecating in Open, Toronto Park Puts up 'Be a Good Neighbor, Pick up After Your Human' Signboards

Excerpts from the interaction

Cricketer, commentator, coach and now an entrepreneur. That’s quite a resume.

It is quite a transformation. Different passages of life. Cricket is my first love, it has made me who I am today and whoever I am is because of this glorious game. Of course, I have really worked hard for it. The hardest day was when I announced my retirement. I couldn’t do it for two years even though I wasn’t playing cricket, couldn’t pen down that letter. It has been one of the hardest things to do in life.

Commentary gave me a nice way to be connected with the game that I love. When I took up commentary with Star Sports, it gave me a platform where I could express my opinions. It’s something I love and enjoy.

Coaching is really challenging. At times it’s much harder than playing. When you are playing, you can go out there and do something but when as coach you just have to just sit inside. You cannot do anything about it, things happen. Being a coach is much more challenging than I thought it would be.

You have been playing cricket and travelled for a major part of your life. So this period of lockdown must have been a different experience for you?

Nice time to stay with family, that’s what I am doing. Me, my wife and, daughter are having every meal together. That never happened before because I was always out or my daughter was in school or my wife was out – she has her own business. We have bonded really well as a family. That’s something we should all embrace. We are so much caught up in our professional lives that we fail to embrace our families.

It’s important for athletes to reassess goals. It’s like driving without a direction – it’s drifting. Reassess, reset your goals because everything you have been doing so far, has changed because of this COVID-19. Every day try to take a small step towards that goal. Exercise, visualisation, whatever – every brick counts in a wall. Keep ticking the small boxes and the bigger one will take care of itself.

The ultimate dream for any sportsperson is to represent country one day. You are one of the lucky few who achieved that. Is there regret that you did not get enough chances?

That has been part and parcel of my life. I am not a guy who dwells much on the past. I am still thinking about what I can do right now. There’s always this talk about that I could have played more Test cricket. But it’s something which isn’t in my hand.

Whenever I held the bat, I played with the best of my ability. I gave my 100 per cent. At the end of the day, I can’t select myself. For that chance has to be there. Not in my hand. Life is a great equaliser. I played close to 120 games for Chennai Super Kings. Don’t think anybody could have actually believed I can play T20 cricket. To play T20I for India and get man-of-the-match on debut, nobody would have bet on me to do that.

So in hindsight, that gave me a lot of satisfaction and a lot of security. I am really proud to have been able to play so much of T20 cricket. 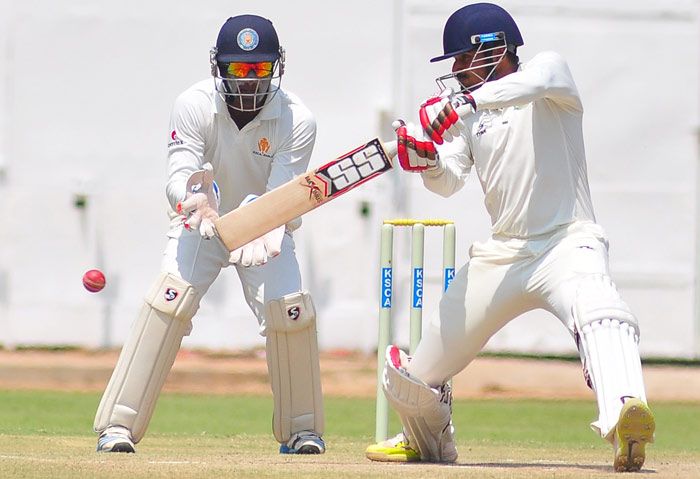 S. Badrinath scored over 16,500 runs during his professional careerr (© IANS)

How much has mental conditioning contributed towards your success as a player?

A lot actually. The reason why I am here is a lot dedicated to my mind and the way I have approached the game. At a very young age it was inculcated by my dad that we need to be at our best when the conditions are hard. That’s when performance really counts. That’s the concept I have been brought upon. It has really helped me being tough throughout my career and get the best out of me.

Some of my best knocks have come when the situation was tough right from my Test debut, T20 debut – conditions were hard, it was a bad wicket, we were under pressure 48/2 when I went in and I got the man-of-the-match.

Then my best first-class score, 250 vs Mumbai, I got it after we were 50/5. Tough situations always got the best out of me over the years. I am not the most talented cricketer that you can see around but I am really tough. I will never give my wicket easily. It has always been there – a part of my system being really tough.

What is the most memorable moment from your career?

Test debut. Playing for my country was one of the biggest dream and the two IPL wins (2010 and 2011) are very close to my heart. Both the years I performed well for them. They were career-changing for me. In 2011 I got Madhavrao Scindia award for the highest aggregate of runs so that is also a memorable moment. It’s not easy to score that many runs. 2008 my ODI debut. Me and Virat (Kohli) made debut in the same series.

Which cricketer(s) have been your idol?

Sachin Tendulkar without a doubt. He’s my idol. Countless times I have tried to emulate him in whatever way I can. Rahul Dravid, Ricky Ponting, Michael Hussey are all up there. Among the current lot, Virat Kohli is a complete package. I don’t judge by one format. A person who is able to fight across formats is a complete cricketer in my book and Kohli does that.

Tell us something about your venture?

MFORE is basically a non-profit initiative which bridges the gap between ability and performance of an athlete. It’s a platform which helps athletes train on mind skills along with physical and technical aspects so that their abilities translate into performance. This is one of a kind entity that will duly deal with the mind skills of a sportsperson.

This initiative is something which I am giving back to the game. It’s about it. I am 39 now – my life is just about sports there’s nothing else. This is a nice way to remain involved. The satisfaction is something that no amount of name, fame and money can match. So that’s the reason I am getting into the space at the moment.