#DhoniBirthdayIn77Days was among the top trends in the country which is currently reeling under the COVID-19 lockdown.

Despite being away from cricket for 10 months, former India skipper MS Dhoni’s popularity has not dipped an inch. Amid all the talks and discussions surrounding the coronavirus pandemic that has brought the world to a standstill, Dhoni surprisingly trended in India on Tuesday evening. Also Read - What is Ivermectin, the FDA-Approved Drug That Goa Recommended to All Above 18?

#DhoniBirthdayIn77Days was among the top trends in the country which is currently reeling under the COVID-19 lockdown. Also Read - Veda Krishnamurthy Pens Emotional Note After Losing Mother, Sister To COVID-19: My World Has Gone Upside Down

The 2011 World Cup-winning captain was born on July 7 but fans started discussing it from April 21 itself, 77 days ahead of his birthday. While some fans hailed his abilities, some lauded his down-to-earth and humble personality. Also Read - Chandigarh Extends Corona Curfew by Another Week | What is Open, What is Shut

Arguably one of the finest to have ever led India, he became the first Indian captain to win all three ICC Trophies apart from leading CSK to three IPL titles.

Within a matter of 45 minutes, fans posted over 48.6 K tweets to hail the former Indian captain. It is unclear what prompted the trend. 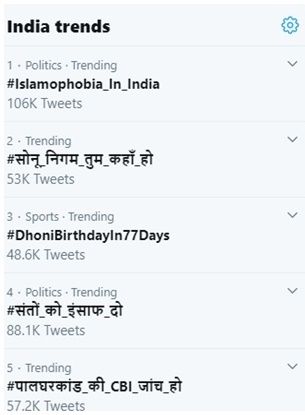 Here is how netizens are reacting.

Dhoni took over Indian ODI captaincy from Rahul Dravid 2007. In 2009, Dhoni also led the Indian team to number one position for the first time in the ICC Test ranking and retained it for 18 Months #DhoniBirthdayIn77Days pic.twitter.com/pbhaHmblSI

He Can Bat
He Can Bowl
He Can Keep
He Can Lead
He Can Finish
He is Fit & Dedicated
He is the Best Captain..

Dhoni, a crowd-favourite was set to make a comeback to cricket in the cash-rich Indian Premier League but the T20 tournament has been postponed indefinitely due to the pandemic. It is highly unlikely that IPL will take place this year as most major sporting events have been postponed or canceled.