Savouring Team India’s hard-fought win over friendly neighbours Afghanistan in a tense ICC Cricket World Cup 2019 encounter, the passionate fans criticized Board of Control For Cricket In India’s (BCCI) unreasonable choice of word on their official Twitter handle. Virat Kohli and Co. registered an 11-run win over Afghanistan in high-voltage battle in Southampton on Saturday. The spirited Afghans gave the Indians an almighty scare after restricting them to a modest 224/8 and then taking the chase to the final over. Also Read - Babar Azam Dethrones Virat Kohli to Become No.1 Ranked Batsman in ICC ODI Rankings

Celebrating Men in Blue’s win at Rose Bowl, the official Twitter handle of the BCCI wrote, “And we march on – #TeamIndia thump Afghanistan by 11 runs”. The message soon became the butt of jokes as cricket fans noticed the gloating tone of the BCCI tweet. Also Read - IPL 2021: Virender Sehwag Questions Batting Approach of Andre Russell, Dinesh Karthik After KKR's Loss Against Mumbai Indians 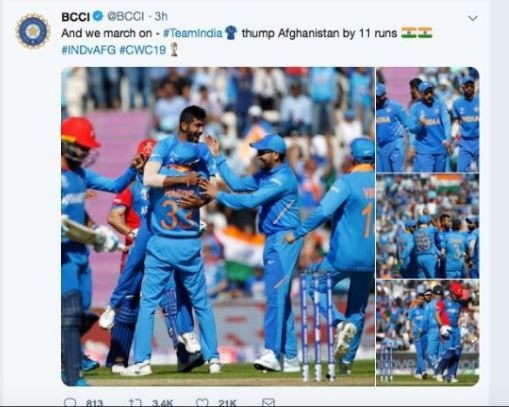 Courtesy a brilliant bowling display by the spinners, Afganistan restricted India to 224 for eight. Chasing 225 to register a historic win, all-rounder Mohammad Nabi took the Afghans close to the finishing line but failed to close out the game in the final over.

this is right ,india frankly didn’t thump afghans ,they almost thumped india ,they just won by a narrow margin ,, don’t underestimate any team, respect cricket, respect teams ,u learnt the lesson in an hard way !!!!!

BCCI your arrogance comes out everywhere. Dont forget you were a minnow once before. You didnt “thump” Afganistan, quite the contrary. Arrogance always precedes a nation’s fall. Dont forget that

They deleted their previous tweet. Not going with ‘thump’, now?

@BCCI
224/8 and a “thump” won by 11runs? The word is Shame. Afghanistan team is closing in with indian team in terms of score every time they play cricket.

Indian pacer Mohammed Shami became only the second Indian bowler to record a World Cup hat-trick after Chetan Sharma (1987). He struck thrice (grabbed a hat-trick) in the final over to inspire India to 11-run victory.