Argentine football legend Diego Maradona said the arrest of FIFA officials on corruption charges proved that he was not "crazy" to consistently question football's governing body, adding that the FBI has finally revealed the truth. 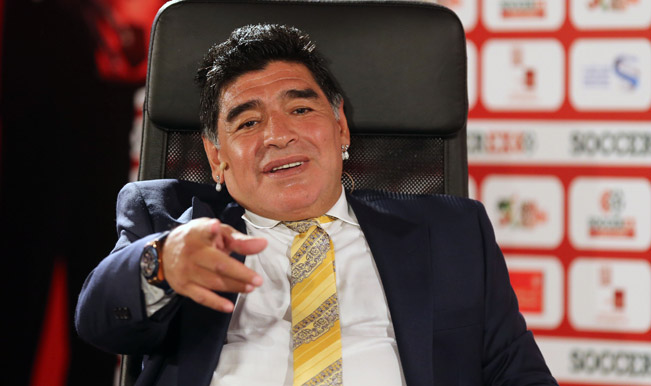 Buenos Aires, May 28: Argentine football legend Diego Maradona said the arrest of FIFA officials on corruption charges proved that he was not “crazy” to consistently question football’s governing body, adding that the FBI has finally revealed the truth. Also Read - Hansi Flick Should Have Won The Best FIFA Coach Award, Says Jose Mourinho

“People said I was crazy. Today the FBI revealed the truth. The Americans did an impeccable job and now people have to explain what’s been happening. The goodwill remain and I will take care of the bad personally!” Maradona was quoted as saying by Argentine Radio La Red on Wednesday. The former Argentina captain said the money earned by those accused of accepting bribes should be invested in a training camp for African children. Also Read - Diego Maradona's Doctor Under Investigation For Involuntary Manslaughter

He has long been outspoken in his criticism of the organisation, which has been rocked by allegations that seven members were guilty of accepting bribes over a 24-year period dating back to 1991.

“The money they earn ought to be used to build a training camp for African children. FIFA has reserves of $1.5 billion and there are players who earn no more than $150,” the former Argentine international, who guided his country to World Cup glory in 1986 said.

Maradona felt vindicated by the indictments issued by the United States Justice Department as a result of an inquiry into FIFA’s affairs by the Federal Bureau of Investigation (FBI) and the Internal Revenue Service (IRS), and queried whether FIFA president Sepp Blatter can be re-elected at Friday’s presidential vote in light of the corruption scandal.

“Today there is no football, there is no transparency. Just lie to people and put on a show to re-elect Blatter. Now we’ll see if he gets re-elected after everything that has happened. Where was Blatter when all this was going on? We want a man of football to be in charge. They came and tried to convince me with money, but I earn my money by working, not taking people for a ride,” he said.

Blatter, who has branded the arrests as “unfortunate”, is bidding for a fifth term as FIFA president, having been re-elected four times since first coming to power in 1998. The 79-year-old’s only challenger for the role is Prince Ali Bin Al Hussein of Jordan.