Andre Moritz (Mumbai City FC) and Tolgay Ozbey (FC Goa) struck the woodwork late in the game as both sides played out their second goalless draw in Indian Super League. 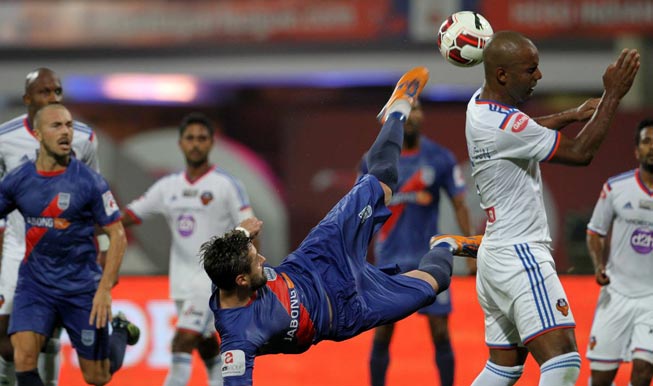 It was a similar affair but not a dull one as Mumbai City FC and FC Goa played out an action-packed goalless draw in the 34th Indian Super League (ISL) 2014 at the D Y Patil Stadium, Navi Mumbai, on Monday evening. The first meeting between the two teams ended 0-0 this month at Fatorda’s Jawaharlal Nehru Stadium, earlier this month. Tolgay Ozbey was unlucky to not score a third goal of the season late in the game when his shot came off the upright; just moments after Andre Moritz had struck the crossbar. Also Read - East Bengal Head Coach Robbie Fowler Promises to Treat Each Player Equally

Subrata Paul was once again strong in goal as he resisted numerous attacks from the visiting players. Peter Reid’s side have played out a stalemate for the third straight time and dropping two points prevented them from overtaking Atletico de Kolkata on top of the table. MCFC are fifth with 12 points while Zico’s side remained second from bottom in the league table with nine points, two better than bottom-placed Delhi Dynamos. Also Read - ISL 2020-21: Jamshedpur FC Sign Seasoned Goalkeeper TP Rehenesh

The game kicked-off with both teams looking bright going forward. Nicolas Anelka, who scored the winner against Kerala Blasters FC and Delhi Dynamos FC here, nearly put his team into the lead. The French striker picked Gregory Arnolin’s pockets but saw his effort fly over the Goan goal. The visitors had the first shot on target with Mandar Rao Desai’s 30-yarder finding Subrata Paul’s hands.

Within minutes after that MCFC’s Czech Republican pair Jan Stohanzl and Pavel Cmovs had their shots deflected away for a corner. The next opportunity fell to Subhash Singh but the 24-year-old forward scuffed his shot haplessly wide.

The first clear chance of the match fell for the home side in the 41st minute. Andre Moritz outwitted Bikramjit Singh with clever skill on the ball and sent Lalrindika Ralte through on goal. The 22-year-old didn’t strike the ball as sweetly as he would have hoped but did well to force Jan Seda into action before half-time.

The second-half was a slightly dull affair but both teams upped the ante considerably in the last 10 minutes. FC Goa had three corners on the trot but failed to punish the home side. Moritz could have broken the deadlock in the 82nd minute when he sent a left-footed effort that was beyond Seda’s reach. But the ball remained in play after crashing off the crossbar.

Ozbey’s strike four minutes later evaded Subrata’s reach and raced towards goal but the Australian striker- just like Moritz – saw his effort come off the woodwork and ensure the deadlock persists. MCFC substitute Nadong Bhutia had the final chance of the match late in injury time but the youngster curled his shot wide.

This was Mumbai City FC’s third consecutive goalless draw and a fifth straight cleansheet for Subrata Paul. They will now face Chennaiyin FC next Sunday while the Goans take on FC Pune City in Fatorda on Saturday.