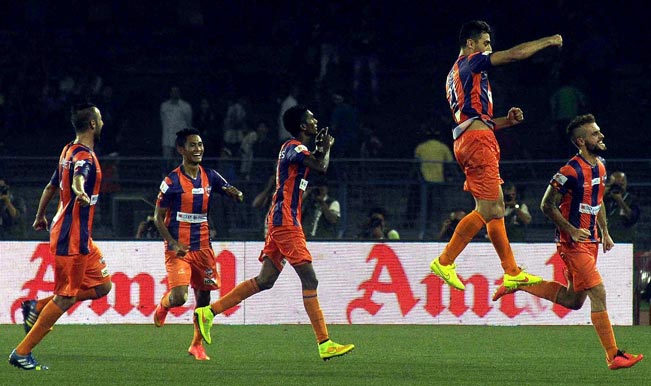 Margao, Nov 21: Back home after a fairly successful brief spell away, a resurgent FC Goa will be eager to earn three points as they prepare to lock horns with FC Pune City in the 38th Indian Super League (ISL) 2014 match here on Saturday. If the resounding 4-1 win against Delhi Dynamos in the away match revived hopes of making it to the semi-finals, a goalless draw against Mumbai City FC in the last match ensured FC Goa remained in the seventh place with nine points from as many matches. Also Read - East Bengal Head Coach Robbie Fowler Promises to Treat Each Player Equally

Any more slip-ups from here on will further jeopardise their prospects. In their last game, both teams controlled the midfield, resulting in fewer chances. Mumbai had the first chance to break the deadlock but Lalrindika Ralte’s effort was saved by Jan Seda and latter Andre Moritz’s curled shot hit the cross bar. Also Read - ISL 2020-21: Jamshedpur FC Sign Seasoned Goalkeeper TP Rehenesh

Goa, who put pressure in the closing stages, too, had the misfortune of hitting the woodwork as Tolgay Ozbey’s shot struck the post and few minutes latter Subrata Paul did well to deny substitute Romeo Fernandes. FC Goa, coming into this match with four points from two matches, hold the psychological advantage over their rivals who have collected only two points from their last three matches.

They also have the home crowd to back them. The hosts will be again looking upto captain Robert Pires and Andre Santos to keep the attack moving along with Mandar Rao Desai and Gabriel Fernandes. If they fire in tandem, FC Goa could avenge their away defeat to FC Pune City. The defense looks sound in Gregory Arnolin, Youness Bengelloun, Narayan Das and Debrata Roy, who will have to deal with the likes of David Colomba, David Trezeguet and Dudu Omagbemi, who are capable of turning the game on its head.

FC Goa’s faith will largely depend on how their strikers respond to the chances that come their way and striker Tolgay, who have scored a goal in each of the two wins. FC Goa coach Zico is positive that his team still have the chance to make it to the semi-finals provided they win their next three home matches. The team has the capacity to fight back and are working hard to recover the points which they have lost.

“It’s going to be a great game and we are looking to reduce the effect of best players of the Pune team and I think it is a game of equals. Tomorrow’s win is crucial for our stay in the race for the knock-out stage,” summed up Zico. FC Pune City, who lost to Chennaiyin FC in their last match, remained on 12 points from nine games, the same as Kerala Blasters and Mumbai City FC, but slipped to fifth place on account of inferior goal difference.