Three crucial points are up for grabs as FC Goa and NorthEast United FC vie for a place in the knockout stage. 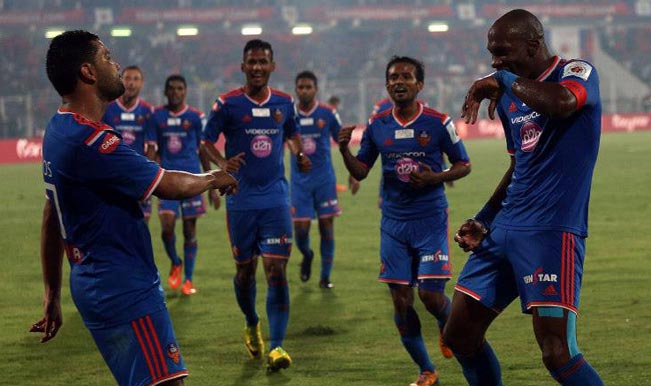 Margao, Nov 30: A thrilling contest is on the cards as FC Goa will be looking to complete a hat-trick of wins when they play their last Indian Super League (ISL) match of inaugural season in front of their supporters at the Jawaharlal Nehru Stadium in Fatorda against NorthEast United FC on Monday. With just three matches remaining, the league is poised for a mouth-watering finish after some shocking results in the last two round of matches. Nobody expected Zico’s side would rise among the top four after they were lying at the bottom. Also Read - East Bengal Head Coach Robbie Fowler Promises to Treat Each Player Equally

The Brazilian legend was unhappy with his coaching staff and after his preferred choice of backroom staff flew in from Brazil, things changed for the Goan outfit as they overturned their fortunes by picking up 10 points from a possible 12 in their last four fixtures. A win against the Highlanders will not only take FC Goa to second spot but also give them the needed confidence to play their last two away matches and win against Altetico de Kolkata and Chennayin FC and thus qualify for the semi-finals. Also Read - ISL 2020-21: Jamshedpur FC Sign Seasoned Goalkeeper TP Rehenesh

Zico is pleased with the away his team has been playing. The last match has been the best among all the matches they have played as they whacked Kerala Blasters FC 3-0; courtesy of Andre Santos’ strike and a brace from Miroslav Slepicka. Romeo Fernandes and Mandar Rao Desai too played well on the flanks keeping the rival defenders under constant pressure.

Slepicka, who struggled to score in the reverse fixture in October has found his scoring boots, netting thrice in the last two matches. The 33-year-old Czech Republican could be the one to cause problems in the rival defense in the absence of their marquee player and defender Joan Capdevila, who is suspended after receiving the red card in NEUFC’s previous match against the league leaders Chennaiyin FC.

Midfield Bruno Pinheiro has been excellent replacement for injured Youness Bengelloun, who is recovering from knee injury in the defence. He along with Gregory Arnolin has guarded the defense well and coach Zico is likely to stick to the same side that won the last two matches. NorthEast United FC, who lost to Delhi Dynamos FC came back strongly to beat  Marco Materazzi’s side to move to sixth place with 13 points from 11 matches; keeping alive their hopes of finishing among the top four.

Ricki Herbert’s side that boasts a number of young players are capable of giving their opponents a tough fight. Their success will depend on how Koke stirs the attack from the middle. Kondawni Mtonga and Massamba Lo Sambou have shown their aerial prowess in the past and the hosts will have to be very watchful against the African pair.

The first meeting between the two sides at the Indira Gandhi Stadium in Guwahati ended in a 1-1 draw and the 46th match too is expected to be a closely fought contest. But the home team who has improved after each match and with crowd support they have a good chance to win and cement their place for the semi-finals.