Anthony D’Souza, Izumi Arata and Eric Brown scored to give Pune FC a winning start to their Federation Cup 2014-15 campaign. 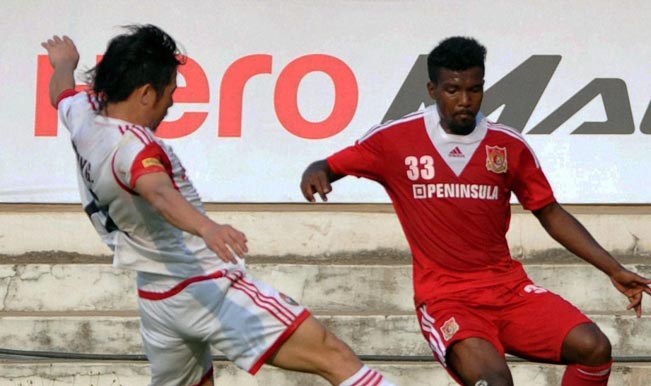 Vasco (Goa), Dec 29: Pune FC showed character and belief to come from a goal down and clinch a 3-1 win over Shillong Lajong in their Federation Cup Group B opener at the Tilak Maidan in Goa on Monday. In a game dominated by Pune, it was Lajong who took the lead through striker Lalrammuana in the 16th minute. Pune fought back to level through winger Anthony D’Souza at the stroke of half-time before scoring twice through skipper Arata Izumi (66th) and striker Eric Brown (90+3rd) to register a convincing victory. Also Read - I League 2018-19: Shillong Lajong Set to Take on Aizawl in Crucial North-East Derby

With this win, Pune go to the top of the Group B table with three points ahead of Bengaluru FC (three pts) on goal difference. Pune began the game on the offensive and created a few chances in the opening quarter. In the tenth minute, left-back Munmun Lugun got into the clear and sent in a crisp cross from left flank which the keeper misjudged and failed to punch out. However, Anthony and Eric clear inside the box too failed to convert in an empty net. At the other end, Lajong took the lead against the run of play. Lalrammuana controlled a long ball played from his own half and rounded off keeper Amrinder Singh and defender Zohimngliana Ralte to score. Also Read - East Bengal FC Heads Into I-League With Best Chance to Clinch Title

Thereafter, Pune continued to push ahead in search of an equaliser but was unable to break down the Lajong backline who defended deep. Pune’s perseverance finally paid off as they levelled in the final minute of the first half. Playmaker Ryuji Sueoka, down the middle, played a nice through ball for Anthony on the edge of the box on the left. The winger controlled and hammered a low drive into the top of the net from inside the box.

The second half saw Pune FC soak pressure in the early exchanges. They took the lead in the 66th minute. Eric played a neat through pass for Anthony on the left who fired in a low shot from inside the box. The attempt was blocked by the keeper who failed to keep the ball in control allowing Arata to slot home the rebound from close. Pune finally sealed the game in the second minute of injury time. Eric, who went on a solo, lost possession just outside the Lajong box. However, he fought back to win the ball and drilled home a powerful shot from inside the box to get on the scoresheet.