FIFA World Cup 2018: All You Need to Know About Nigeria

This edition of the World Cup will be Nigeria's sixth time at football's greatest showcase. To achieve their goals in Russia, the team will rely on young players who will be playing at the World Cup for the first time.

The opening match of Nigeria of FIFA World Cup 2018 was against Croatia on June 17 and lost the match by 2-0. Nigeria played their second match against Iceland on June 22, they got a win over them by 2-0. Nigeria kicked-off their third match on June 26 against Argentina and lost the match by 2-1. Also Read - FIFA Announces New Dates For U-17 Women's World Cup in India Amid COVID-19 Pandemic

Nigerian Team is eliminated from the stage 16. Also Read - We Can Beat Oman if we Play Fearless Football: Gurpreet Singh Sandhu on World Cup Qualifying Opener

At the 1994 FIFA World Cup, debutants Nigeria put in an inspiring performance but were ousted in the round of 16. Also Read - Google celebrates 2019 FIFA Women’s World Cup final with a doodle

In 2014, some 20 years later, Nigeria reached the same heights and failed to secure a place in the quarter-finals following a 0-2 defeat to France. This year they want to surpass that, reports Xinhua news agency.

This edition of the World Cup will be Nigeria’s sixth time at football’s greatest showcase. To achieve their goals in Russia, the team will rely on young players who will be playing at the World Cup for the first time.

The Africans will face Croatia, Iceland, and Argentina in Group D. Nigeria have never played Croatia and Iceland at the FIFA World Cup. 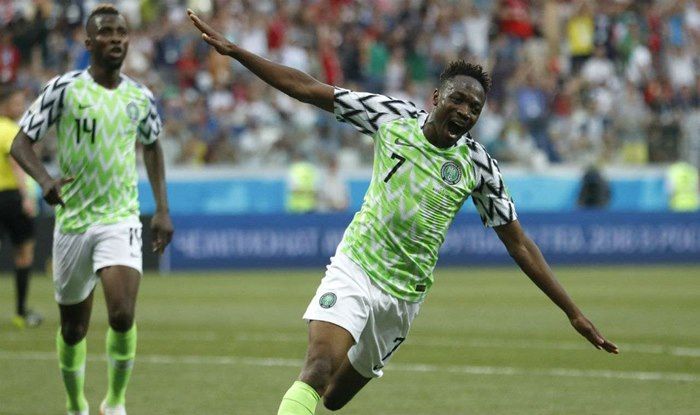 Argentina and Nigeria have met three times at the FIFA World Cup group stage and the South Americans have won every time. This time, the Nigerians have vowed to break the jinx.

The ‘Super Eagles’ are well known for their highly entertaining brand of football. Coach Gernot Rohr has identified the fullbacks as the main challenge for Nigeria, saying there’s still time to sort out the problem.

The team’s shaky defence failed against DR Congo in an international friendly played on home soil. The match ended in a 1-1 draw. The Nigerians also lost 1-2 to England at the Wembley Stadium on June 2.

In matches played as part of the build-up to the World Cup, Nigeria experimented with the 4-3-3 and 5-3-2 formations. The team is working on team harmony and upping its ability in offensive situations.

John Obi Mikel, who plays as a midfielder for Chinese club Tianjin Teda in the Chinese Super League, will captain the ‘Super Eagles’.

There are several stars in the team. Odion Jude Ighalo (Changchun Yatai) Ahmed Musa (CSKA Moscow) and Chelsea forward Victor Moses are among the top players for the ‘Super Eagles’.

Musa is noted as the first Nigerian player to have scored more than once in a World Cup match. He scored two goals against Argentina during the last group match at the 2014 World Cup in Brazil.

Nigeria are 47th in FIFA’s global rankings. They will spend eight days at the world-renowned Avita Resort in Bad Tatzmannsdorf, a city in Austria, before flying to Russia.