FIFA 2018: The five-time world champions will have the flaring desire for redemption and are one of the finest squad this World Cup with better depth and good bench strength in all departments

Brazil could not get the start they wanted in the 21st edition of the FIFA World Cup, the match settled at a draw after the Brazilian’s took a lead courtesy to Coutinho’s wonder goal!
It was a typical Coutinho-esque goal from outside the box straight to the top right corner. Also Read - BMC Makes 7-Day Institutional Quarantine Mandatory For Passengers Arriving from Brazil

In their second game, the Brazilians will look get a win against Costa Rica- a match they are tipped to be favorites -but that barely makes a difference as fortunes does not seem to favor the favourites in this beautiful game. Also Read - South African Strain of COVID-19 Detected in 4 Returnees, 1 Found Positive For Brazil Variant, Says Govt

The wounds of Brazil’s 7-1 catastrophic loss to Germany in the 2014 FIFA World Cup at their home ground (Estadio Mineirao, Brazil) is barely healed- the match went down to be one of the most iconic football matches in World Cup history, at the cost of Brazil’s misery.  Germany went on to win the World Cup and Brazil was left shred to ribbons. Also Read - Neymar-Messi Reunion Cancelled as PSG Star Gets Ruled Out of Champions League Round of 16 Clash Against Barcelona

Brazil has come a long way since 2014 World Cup and with the influx of young talent with foot and flair and talisman Neymar’s stellar form, Brazil will be aiming for nothing less than gold.

The five-time world champions will have the flaring desire for redemption and are one of the finest squad this World Cup with better depth and good bench strength in all departments (forwards, midfield, defence and goalkeepers).

With Manchester City’s Gabriel Jesus and Liverpool’s Firmino, Barcelona’s Coutinho and PSG’s Neymar, all hitting top form this year, Brazil’s forward line is being tipped to go on to be as good as their 2002 squad which led Brazil’s ‘golden era’ and comprised of 2 ballon’dor winners in the squad with Ronaldo and Ronaldinho.

Brazil’s road to the World Cup has been nothing short of great, beating current World Champions, Germany 1-0 , Croatia 2-0 and Russia 3-0 in the FIFA international friendlies.

Brazil will go all guns blazing this summer in Russia with the hope of reinstating themselves as the superpowers of the footballing world. 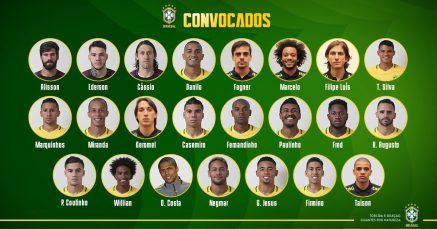 The appointment of Tite as the head coach of Brazil, who took over from Dunga, restored the attacking flair in the squad laden with a plethora of some of the finest forwards in the world.
Scoring 30 goals in the previous 12 appearances and delivering formidable defensive performance,  the Brazilians are leaving no stone unturned on their road to Russia.

Strengths: ‘Attack! Attack! Attack!’, that’s how Brazil rolls, traditionally! Talisman and world’s most expensive footballer, Neymar won the French League player of the year after an excellent display at his very first season at PSG. The other forwards, too, have all had great seasons at their respective clubs. Coutinho-Firmino could rekindle their Liverpool chemistry and tear defences apart with their flicks and tricks. Brazil, when they are attacking, are not simply attacking, they do it with a cocktail of finesse, class and technique which is super appealing to the eyes.

Weakness: As far as their display in the International Friendlies go, Brazil have been nothing short of impeccable. There have been no loopholes as such. If there’s anything that can be picked out, it has to be their over reliance on one player i.e- Neymar, despite having an excellent in-depth squad. Neymar’s image of potentially being one of the all time greatest at times fostered over reliance, which in turn has cost Brazil. When Brazil lost to the Germans in the 2014 World Cup , it was advocated by Neymar’s absence in the match due to injury. Brazil must have surely learnt it the hard way.

Opportunities:  Brazil must exploit the opportunities they get from their attack force. They must engineer a way to attack and defend equally well. They have the opportunity to do so, pertaining to the world-class players in their squad.

Threats: The only threat that could be an obstacle are injuries. Brazilians must use their resources to be ready to counter any such circumstances.