Besides Germany this year, France in 2002, Italy in 2010 and Spain in 2014 were the previous defending champions to get eliminated in the group stage.

This is the perfect recipe for a Bollywood director would love to work on. Also Read - Pele Backs Kylian Mbappe to Become Best Player of His Generation, Says French Forward Can Emulate His Tally of 1000 Goals

Recently, we saw an unique love affair in Russia. Brazilian model Izabel Goulart was there at the Brazil versus Serbia match to cheer for her national side as they beat Serbia 2-0 to seal a Round of 16 berth, but her boyfriend German goalkeeper was left distraught 500 miles away in Karzan as South Korea beat Germany 2-0 to knock out defending champions Germany. Mixed emotions for sure, but Izabel surely stole the show upping the glamour quotient at the tournament. Also Read - Manchester City Striker Gabriel Jesus Reflects on His Dipped Form Following World Cup Campaign

Here are some of the pictures of her posing before the match.

So, if on one hand she wowed fans at Russia, it was heartbreak on the other end.

Here is the glum face of her boyfriend. 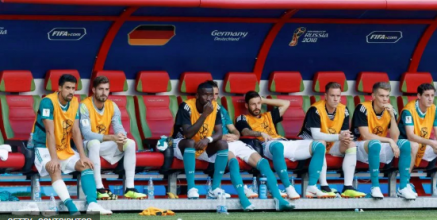 What was surprising was the fact that there was no support for her beau on social media, as she instead wished Brazil good luck. Her post on her Instagram account read, “Raise positive vibrations for today’s match”.

Meanwhile, Brazil has made the cut to the Round of 16, thanks to Paulhinho, Thiago Silva.

Besides Germany this year, France in 2002, Italy in 2010 and Spain in 2014 were the previous defending champions to get eliminated in the group stage.