It seemed Pogba was leading the bandwagon during the invasion.

France football team invaded coach Didier Deschamps’ Press Conference after they beat Croatia 4-2 in the FIFA summit clash at the Luzhniki Stadium on Sunday. Thanks to Paul Pogba, Antonie Griezman, and teenager Kylian Mpabbe, who found the back of the net. The other goal was an own goal by Mario. It was also the first own goal in the history of FIFA World Cup final. France clinched the most coveted crown for the second time as first-time finalists Croatia were left dejected.Also Read - Real Madrid Star Karim Benzema Handed One-Year Suspended Sentence in Sex-Tape Case

But once they won the Cup, they went overboard with their celebrations. Paul Pogba did the dab with the Cup, becoming the first player to do so. But what may not have gone down well is when French players invaded Didier Deschamps’ Press Conference just after the match. All the journalists were present for the PC, when suddenly from nowhere the French players appear. They take over completely. Here is the video. Also Read - Ballon D'or 2021: Lionel Messi, Cristiano Ronaldo, Robert Lewandowski and Neymar Among Nominees

It seemed Pogba was leading the bandwagon during the invasion. Meanwhile, Mpabbe became the second footballer after Pele since 1958 to score a goal as a teenager in the summit clash of the World Cup, that also helped him bag the FIFA Young Player award. Luka Modric bagged the golden boot over Harry Kane.

The fans celebrated the victory worldwide, from Paris to Luzhniki. Here are some videos and pictures. 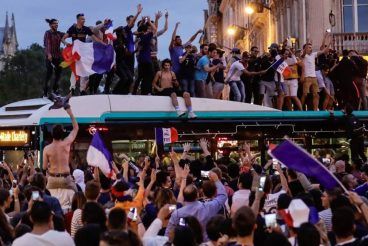 Regardless of the outcome of the final game, it has been a brilliant campaign for Croatia, their determination, passion and never give up attitude inspired football fans all across the world. Croatia will surely come back stronger next time around in Iran 2022.