Abhishek Bachchan, Jaipur's Pink Panthers edged out a highly rated Telugu Titans 46-32 to register their first win of the Pro-Kabaddi League on Thursday. 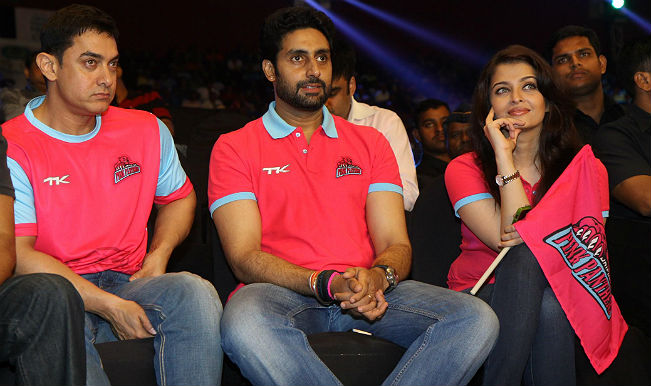 Also Read - Kangana Ranaut Hits Back at Jaya Bachchan: Would You Say This If Shweta Was Beaten, Drugged, Molested, Abhishek Was Bullied

Kolkata, Jul 31: Egged on by team owner and bollywood hero Abhishek Bachchan, Jaipur’s Pink Panthers edged out a highly rated Telugu Titans 46-32 to register their first win of the Pro-Kabaddi League on Thursday. The result also signified Telugu’s first defeat after clinching a last minute draw against the table toppers U Mumba in the first match. Also Read - Aamir Khan's Brother Faisal Khan: Family Gave Me Illegal Medication, Put me Under House Arrest For a Year

Maninder Singh and Jasvir Singh of Pink Panthers wrecked havoc in their raids into the Telugu Titans half, giving Abhishek a chance to try out his Thai 5 before 5000 odd supporters who cheered lustily for Junior Bachchan. They had a crouching tiger approach with lone defender Gokul Shitole coming behind the raider and as he blocked the way back, Rajesh Narwal and Rohit Rana effected perfect leg holds to kill any chance of further offence. At one point Jaipur were on 13 to Telugu’s 7. Also Read - Aamir Khan's Brother Faissal Khan Makes Shocking Revelations: Karan Johar Insulted me, Family Gave Wrong Medication For a Year

However, Telugu recovered after the initial nerves and quality raids from Deepak Nivas Mudda and Sukes Hegde meant they finished the first half at competitive 17-16 in favour of Jaipur. The second half saw Telugu take giant strides and at one point came close to winning a LONA, but Jasvir’s lone battle meant Jaipur stifled off an aggressive offence to maintain 26-21 lead.

However, Telugu achieved the inevitable when they earned the first LONA to move within 2 points of Jaipur’s 26, but Navneet Gautam and Jasvir Singh orchestrated fast paced raids to ensure that the team from the Pink City kept their lead. Jaipur regained their control over the match with a well crafted Lona that saw their lead soar to 41-30 with the match in its last 5 minutes.

Adding to their victory, Jasvir Singh was awarded Best Raider, while team mates Prashant Chavan and Rohit Rana took home the awards for Best Defender and Moment of the Day respectively.