Focusing on FA cup final and not Barcelona: Arsenal’s Ramsey 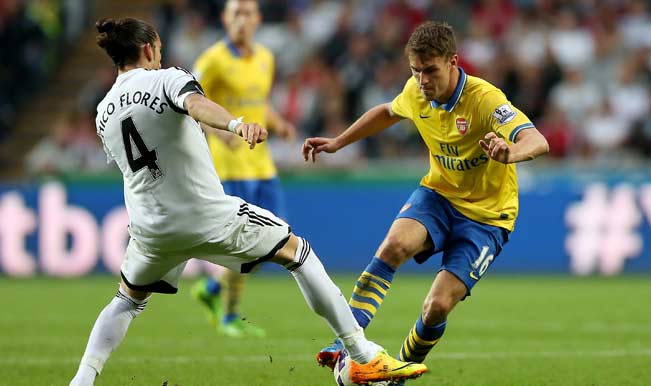 London, May 29: English Premier League (EPL) side Arsenal’s Aaron Ramsey insists that he is paying no attention at all to rumours linking him with a 70 million euros move to La Liga giants Barcelona and instead wants to concentrate on their FA Cup final on Saturday. Barcelona had reportedly sent scouts to watch Ramsey in action numerous times during the summer, while Wales manager Chris Coleman believes the 24-year-old midfielder has in him the skill to succeed at the Spanish football club, reports goal.com. (Also read: Manchester United vs Arsenal Live Streaming and Score: Watch Live Telecast Online of MUN vs ARS Barclays Premier League 2014-15 Match) Also Read - LU vs BHA Dream11 Team Tips And Prediction Premier League 2020-21: Captain, Vice-captain, Fantasy Playing Tips And Predicted XIs For Today's Leeds United vs Brighton & Hove Albion Match at Elland Road 8:30 PM IST January 16 Saturday

I’m focused on Arsenal and on winning the FA Cup. That sort of news doesn’t affect me or enter my mind,” he said. When asked if the move appealed to him, he added: “Not at this time. I’m focusing on the FA Cup, that’s what appeals to me at this time.”