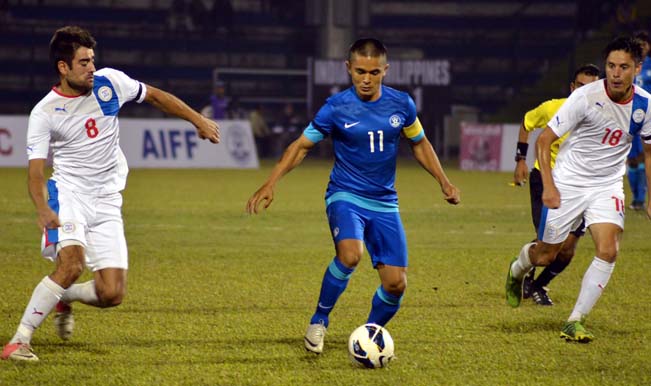 New Delhi, Sep 18: After not much action barring the 2-2 draw against Bangladesh in an international friendly in March this year, India slipped eights places to be ranked 158th in the latest FIFA rankings headed by World Champions Germany. India though can take solace from the fact that all the other sub-continent teams are lying lower than the Sunil Chettri-led side. Also Read - You Can Buy Land in Jammu And Kashmir Now, Home Ministry Issues Gazette Notification

Both Pakistan and Bangladesh saw a slide of 11 rankings to be placed 175th and 181st in the list while Sri Lanka jumped two spots to be placed 176th. On the International front, World Cup winners Germany held on to their numero uno ranking despite losing to second-placed Argentina in an international friendly earlier this month. Also Read - India-US 2+2 dialogue: What is BECA And How Will it Help India? | Explained

Colombia climbed a place to be ranked at No 3 even though it lost to Brazil in a friendly, and traded places with the Netherlands, which lost both its matches this month. Belgium stayed put at No.5 and Brazil climbed one spot to No 6 with Uruguay and Spain following the suit at Nos 7 and 8.

France and Switzerland, which lost to England in a European Championship qualifier, traded places to complete the top 10. Costa Rica is ahead of Mexico and the United States, with the three CONCACAF nations grouped from Nos 15-17. England climbed two spots to be at No 18. Algeria leads African nations at No 20, up by four places. Iran is the top Asian nation at No 44. Japan is the second best ranked Asian nation at No 48.