After Germany crashed out of the World Cup in the group stages, fans hurled racist abuses at him and senior German football board authorities made him the scape-goat of Germany's disappointing run in the World Cup.

Ozil plays for Arsenal Football Club in England and is a 5-time ‘German National Footballer of The Year’ with an impressive tally of 23 goals and 40 assists in 92 appearances for Germany. Also Read - Nawazuddin Siddiqui Says 'More Than Nepotism, Racism is a Problem' in Bollywood

Mesut Ozil’s goal vs Ghana in the 2010 World Cup. Germany will miss him. pic.twitter.com/VTLqD4JBw6

The 29-year-old was one of Germany’s main stars, starting almost every game for Germany in the recent past. He announced his decision on Twitter, after defending the photo taken with Erdogan and Manchester City’s Ilkay Gundogan in May.

The incident started because Turkish-origin Ozil had met with the president Erdogan along with compatriot and Manchester City footballer Ilkay Gundogan in an event London, where they offered with their club jerseys. This caused a furor among German politicians and some fans who questioned the loyalty of Mesut Ozil and Gudogan towards German democratic values.

The photograph was interpreted by some critics as Ozil’s explicit support for Turkish president Erdogan’s re-election campaign amid ongoing tense relations with German Chancellor Angela Merkel.

DFB (German football board) President Reinhard Grindel was one of the first to criticize the German national footballers, but after a meeting, he said, “Both assured us that they had not wanted to send any political signal with that action”

“Football and the DFB stand for values that are not sufficiently respected by Mr. Erdogan. That is why it is not good for our national players to be abused by his campaign maneuvers,” he had said on Twitter.

Mesut Ozil and Ilay Gundogan also had a meeting German President Frank-Walter Steinmeier before the start of the World Cup, after the meeting the president Steinmeier also posted a photo on Facebook showing him with the two football players in front of his office at the Bellevue Castle in Berlin. 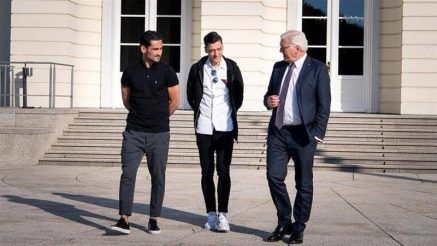 According to Ozil, the president heard him out and came to a mutual understating that it is best the matter is closed and the focus should remain on the World Cup.

However, after Germany crashed out of the World Cup in the group stages, fans hurled racist abuses at him and senior German football board authorities made him the scape-goat of Germany’s disappointing run in the World Cup. 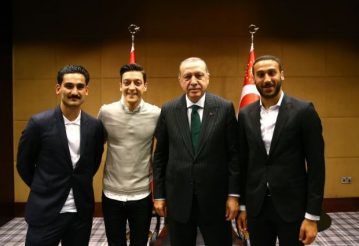 “It is with a heavy heart and after much consideration that because of recent events, I will no longer be playing for Germany at international level whilst I have this feeling of racism and disrespect. I used to wear the German shirt with such pride and excitement but now I don’t,” the Arsenal star wrote.

“This decision has been extremely difficult to make because I have always given everything for my teammates, the coaching staff and the good people of Germany. But when high-ranking officials of the DFB (the German football federation) treat me as they did, disrespect my Turkish roots and selfishly turn me into a political propaganda, then enough is enough, he added.

“Having a picture with president Erdogan wasn’t about politics or elections. It was about me respecting the highest office of my family’s country,” Ozil said in a lengthy statement on his official Twitter account earlier in the day.

The footballer is considered a symbol of integration in Germany, where people of Turkish descent make up the biggest immigrant community, numbering 3.5 million, half of whom retain their right to vote in Turkey.

Ozil slammed DFB president Reinhard Grindel, who he accused of trying to benefit his own political views. He also accused the DFB president of racism.

“I know that Grindel wanted me out the team after the picture, and publicised his view on Twitter without any thinking or consultation, but Low and (director) Oliver Bierhoff stood up for me and backed me,” he revealed.

“In the eyes of Grindel and his supporters, I am German when we win, but I am an immigrant when we lose.”

Coach Low was supported Mesut Ozil and backed him throughout the tournament.

“Are there criteria for being fully German that I do not fit?” Ozil questioned in his post. “My friend Lukas Podolski and Miroslav Klose are never referred to as German-Polish, so why am I German-Turkish? Is it because it is Turkey? Is it because I’m a Muslim?”

Racist and xenophobic display by the German football board has cost them one of the brightest talents in world football.

We should not stand with Ozil, we should thank him for standing for all of us! Europeans are the biggest racists, they just know how to hide it. #StandWithOzil pic.twitter.com/IJphzGlabd

“My friends Lukas Podolski and Miroslav Klose are never referred to as German-Polish, so why am I German-Turkish? Is it because it is Turkey? Is it because I’m a Muslim?” Immigrants or children of immigrants are only wanted when they bring success. I stand with @MesutOzil1088

You are not alone #MesutÖzil. Turkey is with you. You are in our hearts and prayers. Thank you for your courage to stand against racism, discrimination and Islamophobia. We are proud of you @MesutOzil1088

Stand with Ozil is trending among football fans for support.

The football world stood with the former Real Madrid number 10, a player who was born and raised in Germany and his talent was nurtured by German league Bundesliga where he made his mark with Schalke football Club before joining Cristiano Ronaldo and company with Real Madrid.

Mesut Ozil joined Arsenal in 2014 on a record-breaking deal of 42.5 million euros, where he plays currently.