The Forbes 2018 compilation of the world's highest-paid athletes is testimony to the fact that there has been no headway to close-in on the gender disparity in sports - the list does not feature a single woman sportsperson in the top 100.

The Forbes 2018 compilation of the world’s highest-paid athletes is testimony to the fact that there has been no headway to close-in on the gender disparity in sports – the list does not feature a single woman sportsperson in the top 100.Also Read - Nikhat Zareen Journey From Once Being Brutally Trolled For Asking 'Fair' Chance To Becoming World Champion

The list featured the 23-time Grand Slam winner Serena Williams last year but she has been off the court due to pregnancy and giving birth to her daughter. Also Read - Blackpool Forward Jake Daniels Comes Out as Gay. Football Community Extends Support to 17-Year-Old

Tennis’ female sportsperson Li Na, Maria Sharapova, and Serena Williams were list regulars but Li retired in 2014 and Sharapova is still dealing with the aftermath of a 15-month suspension for using a banned substance, Forbes reported. Also Read - Aston Villa vs Liverpool Live Streaming Premier League in India: When and Where to Watch Aston Villa vs Liverpool Live Stream Football Match Online on Hotstar; TV Telecast on Star Sports

The disparity has been evident for ages on the (mis)representation of women, objectification, the massive pay divide and more recently, they have also been subjected to online trolls. The disparity is not just stemmed from online trollers and patriarchal dominions, but it goes deep into the higher level of authorities and decision makers of sports boards across the world.

Indian badminton ace Jwala Gutta, the 14-time winner of the National Badminton Championships, compared sports as a career for women akin to walking on a tightrope.

In an interview with Economic Times, she said, “There is a lot of discrimination. Consider this: whenever a badminton squad is sent for an international meet, there are usually 10 boys and 3-4 girls. Why is it like this?.”

According to her, women face unfair scrutiny about their life outside of sports.

“If we have good hair or look good, we are called glamorous and it is presumed that we are not focused on sports,” she added.

The former president of FIFA, Sepp Blatter’s comments on women footballers caused outrage in January 2004, when he suggested that they should wear more “feminine clothes” to make their game captivating to the audience.

“Let the women play in more feminine clothes like they do in volleyball,” he said at the time.

“They could, for example, have tighter shorts.”

Objectification of women does not end at the streets, it prevails everywhere and sports is just another platform.

In a report called ‘The Gender (In)Equality Issue’ by Sports Illustrated Global Sports Salary Survey 2017, notes that ‘The best paid 12 men’s sports include athletes from the ‘big four’ leagues of North America in basketball, baseball, ice hockey and American football; from the ‘big five’ divisions of European football in England, Spain, Italy, Germany and France; from cricket in the IPL in India, from football in the CSL in China and from baseball in the NPB in Japan. Collectively they earn £15.7 billion ($20.4bn) at an average of £2.16m ($2.8m) each, per year.

The (male) basketball players in the NBA earn almost 100 times what their female counterparts earn in WNBA and average earnings in England’s top football division, the Premier League, are about 100 times those in the top women’s division in England, the FA Women’s Super League. That massive disparity prevails more widely across elite team sport.’ 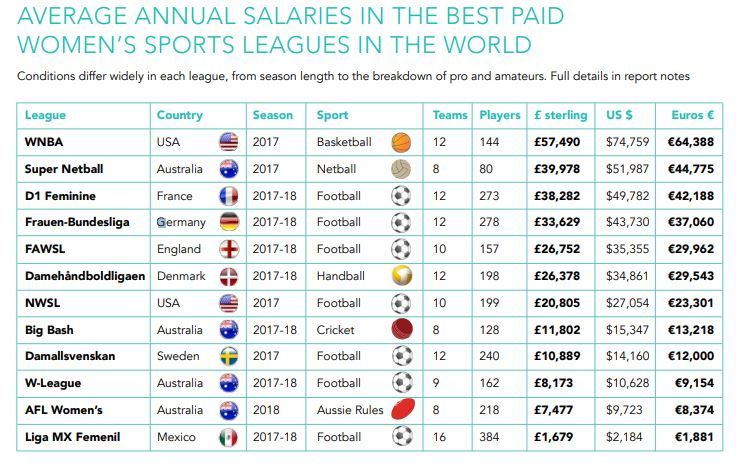 The table above by Sports Illustrated shows the results of a survey of a dozen leading women’s sports leagues, Those 12 leagues earn $68.6 million as compared to men’s figure of $20.4 billion and at an average of $27,855 each, per year (men’s average figure – $2.8m per year). In diverse sports across different nations and cultures, that group of men in elite team sports is earning 101 times the amount of elite women.

Patriarchal Representation on Social Media And its Impact on Women Sportspersons :

The wrath of social media and online trollers are widespread to which notable Indian women sportspersons like Jwala Gutta and Mithali Raj have been subjected to. An average sportswoman — as opposed to a sportsman — undergoes more oppression and hardships to rise as flag-bearers for the nation in their respective sports. Regardless, in several cases, they fall prey under the subjugation of sexists and trolls.

These trolls are mere keyboard warriors who adjudicate behind digital screens and privilege themselves with the anonymity of the online space. There is no accountability factor that one needs to adhere to when they are trolling or body shaming online; when the content is explicit and offensive, trollers opt to be anonymous.

When one conveys their thoughts on a public platform, they need to do it with a certain sense of accountability; words must be measured and those who go on unreasonably must be reminded and called out. Communication in the form healthy criticisms is clearly a lost art and then there are trolls — all fun and games — but a pet subject of societal stigma, prejudice, and sexism – make no mistake.

A troll is a reflection of YOUR social values. And as Mithali Raj says “Train your mind to see the good in everything!” #YouGoGirl pic.twitter.com/NfqJsauopc

“Trolls aren’t worth my time, I wouldn’t have picked up the bat if I cared about trolls”, said Mithali Raj in an interview, speaking about online trolls aimed at her.

In India, there are several obstacles that an aspiring women sportsperson has to go through; patriarchal supremacy, the flawed ideology of women’s inability to prevail in sports and shoddy facilities in regional India are some of the factors.

The Bollywood movie ‘Dangal’ based on the true story of re-known Indian Olympic medalists Geeta and Babita Phogat, depicts the struggle against poverty and patriarchal mindset faced by aspiring women sportspersons in India. Similarly, five-time World champion Mary Kom of Manipur also had to go against her father’s wishes and encounter the limited facilities of conflict -inflected regional Manipur to chase her dreams. 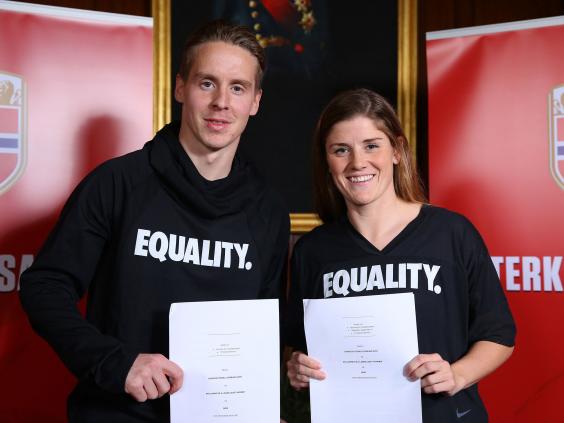 Joachim Walltin, the president of the Norwegian Players’ Association explained: “We wanted to increase the money on the marketing side for the women’s team but it was actually the FA’s own idea to go for equality. They said: ‘Isn’t it a cool idea and wouldn’t it be a good signal if we did things equally?’

This historic agreement is a story that should serve as an example of the vast majority of sports federations around the world.