World No.1 tennis player Novak Djokovic, Marin Cilic and Andy Murray all won their respective encounters to enter the men's singles fourth round of the French Open here on Saturday. 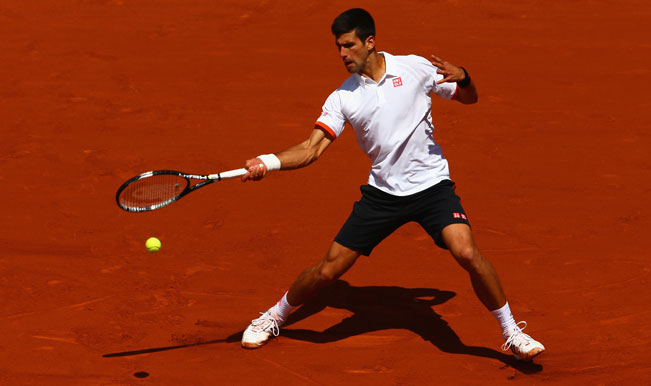 Paris: World No.1 tennis player Novak Djokovic, Marin Cilic and Andy Murray all won their respective encounters to enter the men’s singles fourth round of the French Open here on Saturday. While Djokovic and World No.3 Murray beat Australians Thanasi Kokkinakis and Nick Kyrgios respectively, World No.10 Cilic eased past Argentine Leonardo Mayer at Stade Roland Garros. Also Read - Australian Open 2021 Delayed Due to COVID-19, Set to Begin From February 8 in Melbourne: ATP

Djokovic defeated his 19-year-old rival 6-4, 6-4, 6-4 to reach the pre-quarterfinals. The Belgrade native has twice been runner-up here, losing to Rafael Nadal in the 2012 and 2014 title matches. Next up, Djokovic will face either local hope Richard Gasquet or Kevin Anderson. In the match featuring Cilic, the 26-year-old beat World No.23 Mayer 6-3, 6-2, 6-4. The Croatian hit 37 winners and saved five of the six break points he faced in the two-hour, five-minute match. With the victory, Cilic achieved his best showing here for the third time. He reached this stage in 2009 and 2010 as well. Also Read - ATP Finals 2020 Results: Novak Djokovic Beats Diego Schwartzman in Straight Sets to Begin Campaign With Big Win

“My first priority for the French Open was to win some matches to get the confidence back I’m needing in the matches. I was not looking so much for the result, as the clay-court season this year hasn’t been the best,” Cilic said, who will face the winner of seventh seed David Ferrer and Simone Bolelli match. Murray also proved too good for rising Kyrgios as he defeated the 20-year-old Australian 6-4, 6-2, 6-3.

The Scot showed his experience and guile in the third round contest, taking advantage of an ailing Kyrgios, who is struggling with a right forearm injury, to prevail in just under two hours. After early breaks were exchanged in the first set, Murray made a decisive move in the seventh game to break for a 4-3 lead.

But as the second set progressed, Kyrgios began to struggle with his injury, slowing down his serve before calling for the trainer after seven games. The Australian rallied after losing the second set, briefly going up a break in the third set. But Murray immediately broke back and claimed another break in the seventh game.

Kyrgios pulled out all the stops in the ninth game as he tried to stay in contention. But Murray’s consistency paid off and the Scot converted his second opportunity. The 28-year-old Murray came here in the form of his life on clay, having won back-to-back titles in Munich, his first ATP title on the dirt, and Madrid, where he beat Nadal in the final.