Spain's Rafael Nadal stayed on course for a possible quarter-final showdown with Serbian world No.1 Novak Djokovic at the French Open, brushing aside Russian Andrey Kuznetsov 6-1, 6-3, 6-2 in the third-round. 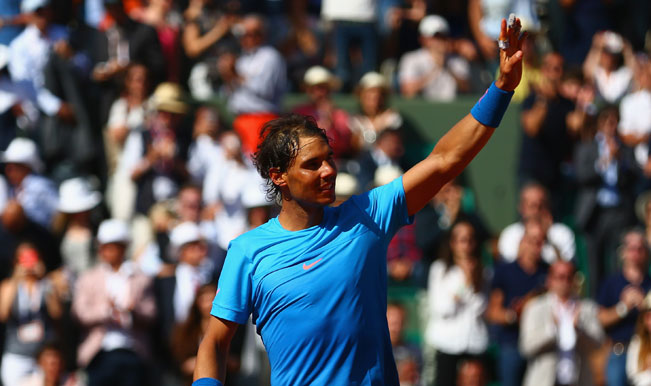 Paris, May 31: Spain’s Rafael Nadal stayed on course for a possible quarter-final showdown with Serbian world No.1 Novak Djokovic at the French Open, brushing aside Russian Andrey Kuznetsov 6-1, 6-3, 6-2 in the third-round. Kuznetsov did not hold his own serve until the match on Suzanne Lenglen Stadium was an hour old and the nine-time champion had seized complete control by then. Also Read - Not CR7 or Lionel Messi, Rafael Nadal's Favourite Footballer is Brazil Legend Ronaldo

The sixth seed’s ranking has slipped this year due to his underwhelming results in the clay-court season but he broke Kuznetsov’s serve on eight occasions on Saturday. Nadal lost his own serve twice, once when leading 5-1 in the second set. With the win, the Spaniard improved his record at tennis’ clay-court Grand Slam tournament to a staggering 69-1, his only loss coming at the hands of Sweden’s Robin Soderling in 2009. Also Read - Australian Open 2021 Delayed Due to COVID-19, Set to Begin From February 8 in Melbourne: ATP

He also expressed confidence in a post-match interview that he is peaking at the right time after losses to rivals Djokovic, No.3 seed Andy Murray and eighth-seeded Swiss Stanislas Wawrkinka at the biggest Roland Garros tune-up events. Next up for Nadal in Monday’s round of 16 will be unseeded American Jack Sock, who breezed past promising Croatian 18-year-old Borna Coric 6-2, 6-1, 6-4 on Saturday.

If Nadal wins that match and Djokovic defeats Frenchman Richard Gasquet, the 14-time Grand Slam champion and 2015 French Open favourite would square off on Wednesday in perhaps the most highly-anticipated quarter-final match in the tournament’s history.