Rohan Bopanna, Leander Paes and the Indo-Swiss pair of Sania Mirza-Martina Hingis advanced into the second round of the men's and women's doubles competitions 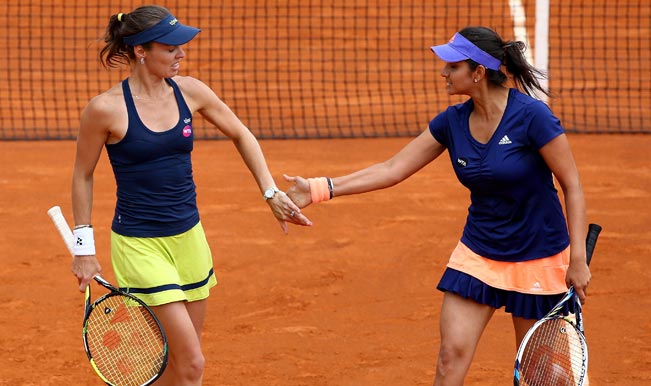 The first set was a close contest which was finally clinched by Krajinovic and Troicki. But Bopanna-Mergea came back strongly to win the second set 6-3 and followed it up by clinching the third set 6-4. Bopanna-Mergea will next face American combine Austin Krajicek and Donald Young in the second round, who earlier beat Maxime Teixeira and Florent Serra 6-1, 6-3. Also Read - French Open 2020 Final: Chris Evert Calls Out Novak Djokovic For 'Rivalry With Rafael Nadal Biggest in Sport' Comment

Meanwhile, Paes along with Canadian Daniel Nestor beat Australian pair James Duckworth and Chris Guccione 6-2, 5-7, 7-5 in the first round. Paes-Nestor showed their dominance right from the word go winning the first set 6-2 in a one sided affair. But the Australian pair refused to give up. In a tight game, although Paes-Nestor had the upper hand, Duckworth-Guccione held their nerves till the end to level the game by winning the second set 7-5.

The third and final set was the most entertaining one as the game swung on both sides but the Indo-Canadian pair had the last laugh, winning it 7-5 to wrap up the match and cruise into the second round. Top seeded India’s Sania paired up with Swiss Martina Hingis to outplay Germany’s Julia Görges and Czech Republic’s Barbora Krejcíková 6-3, 6-0 to enter the second round.The Indo-Swiss pair were in full flow right from the start as they lost just three games and won 12 in the match, to steer themselves into the next round.