The first match, which will be India’s first ever NBA match, also serve as a preseason game, will be between Sacramento Kings and Indiana Pacers on October 4.

The festivities in Mumbai to welcome the NBA India Games 2019 have begun. The iconic Gateway of India at Nariman Point commemorated the arrival of the Games with a stunning light and sound montage. With breath-taking graphics and shots of the NBA iconography, the Gateway of India was a canvas to create buzz for the historic preseason games.Also Read - Actor Ranveer Singh Named NBA Brand Ambassador For India

Mumbai is set to host the upcoming NBA Games. The first match, which will be India’s first ever NBA match, also serve as a preseason game, will be between Sacramento Kings and Indiana Pacers on October 4. It will be played in front of 3000 kids from 70 schools in Mumbai. The next match – on October 5 – will be open to the public. Also Read - New IT Rules: Big Win For News Channels as Kerala High Court Orders no 'Coercive Action' For Not Following New IT Laws

Mumbai: The Gateway of India has been illuminated to commemorate the arrival of the NBA India Games 2019. The preseason games to be played on October 4 and 5, 2019. pic.twitter.com/L3Qd4vNGgE

In addition to the breath-taking show at the Gateway of India, other attractions leading to the build-up of the event at the NSCI Dome in Worli include the first-ever floating court on Bandra-Worli sea link that will highlight the values of NBA.

#WATCH Mumbai: The Gateway of India illuminated to announce the arrival of the NBA India Games 2019. The preseason games will be played on October 4 and 5, 2019. pic.twitter.com/kYmRFrzRXh

There are also graffiti artists like NME and Minzo, who will promote the events through street art. Indian hip hop artists like Shah Rule and Brodha V will create a buzz through original compositions. Also for the matches, Jio Saavn has curated playlists in Hindi, English and Tamil. 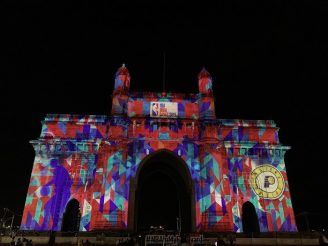 The Gateway of India in Mumbai lit in the colours of the NBA.

“It is going to be a really exciting time for us as a team, for the league, to be part of the first NBA India Games 2019 in India. I had a talk with my teammates and they are really excited to see the culture. The biggest thing about India is that the culture is beautiful. I was there earlier this year, I want to give my teammates a chance to walk in the city, eat Indian food and see the Taj Mahal and also work with the kids who are part of the NBA Academy in India. It is a great experience. From a basketball perspective I want to see how passionate the fan base is,” Sacramento Kings’ Harrison Barnes had said earlier.