Happy Birthday Mahendra Singh Dhoni: What Has The Former India Skipper Been Doing Since Taking Sabbatical?

Happy Birthday MSD: Speculations were rife ahead of the 2019 Cricket World Cup that former India skipper MS Dhoni could hang his boots after the marquee tournament. There was also a hope that India – led by Virat Kohli – a well-balanced and potent unit will lift the trophy. There was also a feeling that Dhoni – who was 37 at that time – would look to sign off on a high, like, maybe Imran Khan. Also Read - Virat Kohli, MS Dhoni In Yahoo’s List Of Most-Searched Personalities This Year

Unfortunately, all those hopes of a fairytale send-off were put to rest after Kohli’s India succumbed to a heartbreaking loss at the hands of New Zealand in the semis. Also Read - MS Dhoni: Twitterverse Unites in Support of Former India Captain to Win ICC Spirit of Cricket Decade Award

While some criticised India’s most successful skipper ever – Dhoni – for his slow-paced batting, others reckoned it was time for him to call it a day, as a young and more aggressive Rishabh Pant, was in the waiting and was taking giant strides in international cricket. Also Read - India vs Australia: Virat Kohli Breaks MS Dhoni's Record For Most Fours as India Captain

Amid the talk of his retirement, India toured the West Indies for a short tour but Dhoni decided to go on a sabbatical which has continued to this day.

His break notwithstanding, Dhoni has maintained his popularity. On the eve of his birthday, fans began trending Happy Birthday Dhoni on twitter.

Here we take a look at what the talisman has been doing during the break.

Meeting The Army-men in J&K

Dhoni went to Jammu and Kashmir – where he spent some time with Territorial Army unit of the Parachute Regiment with which he holds an honorary rank. From polishing the boots to singing songs for the soldiers, playing tennis-ball cricket and volleyball, Dhoni did all while performing the guard and patrolling duties. This was in mid-August with videos/pictures surfacing online, and as expected going viral in no time.

Retweet, If you are a Proud Fan Of LT COLONEL MSD. ❤️🇮🇳 pic.twitter.com/yKaV7fagYI

During this period, he also missed the home series against South Africa and Bangladesh and chief selector MSK Prasad made a statement where he said India is looking ahead, which clearly meant the side was looking at young Pant to take over. From Dhoni’s end, there was no clarity as he – in his own inimitable style – kept mum. The only statement that came from his end was that he wants to be left alone when asked by reporters at a promotional event.

This was during the New Year when the Dhonis went on a vacation to Mussoorie. He was seen enjoying quiet time in the snow-clad mountains with daughter Ziva. The video, shot in the -3 degrees temperature, showed the veteran wicket-keeper enjoying the snowfall in the company of his family.

With Pant’s inconsistency in the limited-overs, there were calls for the return of Dhoni with the team getting ready for the T20 World Cup slated to take place later this year in Australia. Three months before the now suspended cash-rich Indian Premier League, it was being speculated that should Dhoni perform well for Chennai Super Kings, doors to international cricket will automatically reopen. India coach Ravi Shastri, in an interview, hinted that Dhoni – who had not played competitive cricket since India’s world cup exit, could be considered if he performed outstandingly well in the T20 tournament.

Dhoni is a doting father. Time and again videos emerge on the social sphere of him playing with his daughter Ziva. A video in which he can be seen teaching Ziva how to ride a bike was a massive hit among the fans.

In between, all of this, when the Indian team toured New Zealand, Dhoni had made time for another family outing to Kanha National Park, where he indulged in wildlife safaris with Sakshi, Ziva and friends. Dhoni also turned photographer and captured a tiger from his lens. Just after that, he went on a short holiday to the Maldives with former India cricketer Rudra Pratap Singh.

When u spot the tiger on ur own and he obliges u with just enough time to click a few pics.Visit to kanha was outstanding

And finally, Dhoni was back to what he does best. He joined the CSK camp on March 2 in the build-up to IPL 13. In the training camp, he was given a grand welcome by fans – who turned up in huge numbers to watch him practice at the M Chidambaram stadium. But it did not last long, as the coronavirus pandemic started spread its tentacles and the CSK officials decided to suspend the camp on March 14. Currently, there is no clarity when or if the IPL will be played this year.

From his long-hair days to going bald after India lifted the World Cup in 2011, Dhoni has been known to experiment with his looks. During the coronavirus lockdown, Dhoni maintained his distance from the online world even as his teammates continued to post videos, photos, or indulge in chats. And then a picture surfaced of his bearded look that left his fans surprised. 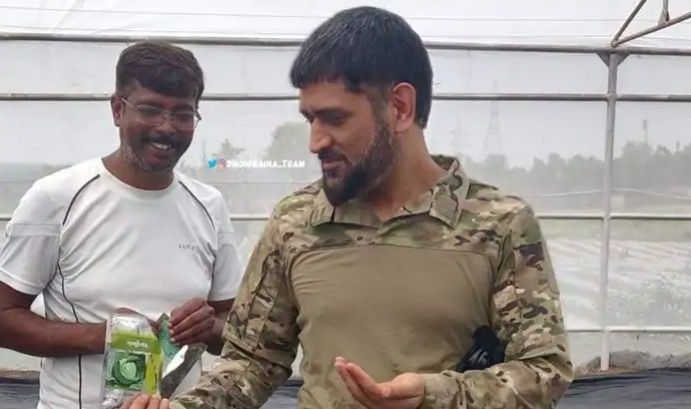 As the two-time World Cup-winning former skipper turns 39, here is wishing more success to the outsider – who took Indian cricket to newer heights.