Happy Friendship Day 2018: We are seeing the friendship between Chahal and Rohit blossom of late, thanks to the involvement of Ritika Sajdeh

From a cricketing point of view, this day holds significance for cricketers who spend most of their time away from family, on tours and hence their team members in a way become their extended family. A lot of friendships are highly spoken about and truly deserve the recognition today. Also Read - Mujhe Maaro Fame Momin Saqib Celebrates Pakistan's Historic Win Over Virat Kohli's India; Video Goes Viral | WATCH

To start with we have picked three cricketing pairs who form a good bond on and off-the-field. Also Read - Dinesh Karthik Loves Virat Kohli's Reaction Towards Journalist For Asking Question on Rohit Sharma After Pakistan Hammer India in T20 WC

We can vouch for the off-field bit, thanks to social media:

Dinesh Karthik-Hardik Pandya: The world was unaware of how close the wicketkeeper-allrounder duo was. But Hardik Pandya’s recent tweet highlights how close a bond the two share. In Pandya’s latest tweet he refers to Karthik as his ‘No 1 Love’. Well, that is something, friendship from a different planet.

Here is the picture:

Sachin Tendulkar- Virender Sehwag: This friendship is no secret. The former openers are very close to each other even after they have called it a day. The legendary Indian limited overs openers still meet each other and both have a mutual admiration for each other which makes their bond special and exclusive.

When with God ji @sachin_rt ,best to be at His feet. #HammerNahiGadaHai#RamjiHanumanjipic.twitter.com/CJCeH11Hd8

The two batsmen in their prime were a nightmare for bowlers.

MS Dhoni-Virat Kohli: The current Indian captain is a huge admirer of his predecessor and that is evident even when they play the game now. Kohli inevitably looks at Dhoni when there is an appeal and asks his suggestion. Kohli also followed his suggestion on a number of times in the past and they were successful. They also respect stand by each other in times of difficulty. More recently, when MS Dhoni faced heat for his slow-batting during the ODI series in England, it was Kohli who came out and backed MSD, just goes to show the mutual respect they have for each other. 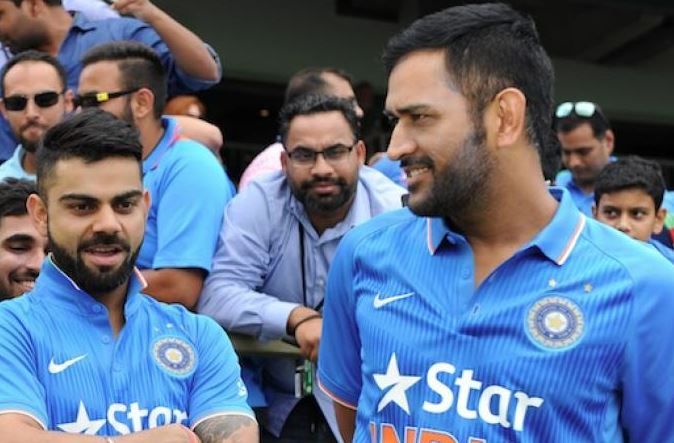 Yuzvendra Chahal-Rohit Sharma: We are seeing the friendship between Chahal and Rohit blossom of late, thanks to the involvement of Ritika Sajdeh. Recently, Chahal posted a message on Rohit-Ritika’s picture ‘Miss you, Rohit’. That is when a possessive Ritika replied saying, ”Now, he is mine”,. This is a testament to the close bond the Indian opener shares with the leg-spinner. Then we saw Rohit hilariously trolling Chahal on his birthday. On field you are the greatest that the game could produce, off the field, you are Jay and me, Veeru… On this friendship day all I want to say is.. @sachin_rt “Ye dosti hum nahi todenge.. Todenge dam magar tera saath na chodenge.. #HappyFriendshipDay#FriendshipDay2018pic.twitter.com/Mbs7Ru0fdS

This is the one fans must have been waiting for.