Vishu is being celebrated with traditional fervour and gaiety in the state of Kerala on April 15 when special pujas will be performed. 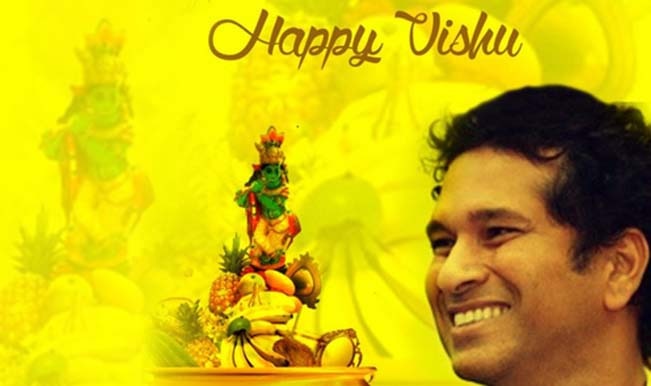 Indian cricketing legend Sachin Tendulkar never lets go of an opportunity to connect with his fans and followers through social media. On the auspicious occasion of the Kerala New Year, Vishu 2015, Tendulkar took to Twitter to wish everyone from Shanghai where he is currently attending the Laureus World Sports Awards 2015. He wrote, “Happy Vishu! Wishing everyone joy and happiness!’ along with a Vishu picture. Vishu is being celebrated with traditional fervour and gaiety in the state of Kerala on April 15 when special pujas will be performed. Also Read - ENG vs IND 2021: 4 Milestones Which Virat Kohli Can Achieve in Upcoming Five-Match Test Series

Tendulkar who has been very active on social media shares his thoughts with his followers on a regular basis. He ensures he conveys his wishes to his loyal followers without fail. Even when he is visiting Shanghai to attend the Oscars of Sports, the Laureus World Sports Awards 2015, Sachin has not failed to share the his wishes for the festival moments, and later a photograph of himself along with Chinese basketballer Yao Ming and Kenyan long-distance track runner Tegla Loroupe.Also Read - Sachin Tendulkar or Virat Kohli? Ex-Pakistan Pacer Shoaib Akhtar Picks Who is Better

Hollywood actor Bill Murray, famous for iconic roles in blockbuster films such as Groundhog Day, Ghostbusters, Lost In Translation and The Grand Budapest Hotel, is to present a Laureus World Sports Award at the Grand Theatre. In a star-studded line-up, he will be joined by Henry Cavill, widely acclaimed for his role as Superman in the film Man of Steel, and South Korean award-winning actress Ha Ji-won. The ceremony will be hosted for the second year by film and TV star Benedict Cumberbatch. Inputs from IANS.