Recently, Kohli posted a picture of himself on Instagram with a caption: “Everyday is an opportunity to learn and grow. Stay humble.”

Known to share a great camaraderie both on and off the field, Virat Kohli and Harbhajan Singh are among the best of the friends. Both the stalwarts share a great rapport and also has loads of mutual respect for each other. Bhajji is best remembered as Team India’s tireless servant who took the country to several heights, while Kohli has emerged as the able king of the throne and the perfect successor of legendary MS Dhoni.

Having already established himself as one of the best batsmen of the era, the India skipper continues to win praises from his fans, both from the cricket fraternity and otherwise. Kohli, who is known to wear his heart on his sleeves has always played the game passionately. What makes him more special is the fact that despite the passion Kohli has always shown willingness to learn and grow. Even though sometimes Kohli appears to go over the line with his aggression, he always tries to stay humble and grounded. Recently, Kohli posted a picture of himself on Instagram with a caption: “Everyday is an opportunity to learn and grow. Stay humble.”

Every day is an opportunity to learn and grow. Stay humble. 🙏

Reacting to the photo, off-spinner Harbhajan Singh poked fun at the Indian skipper, saying: “Everyday, there is an opportunity for you to make more and more moolah.” Recently, Kohli, for the second time in a row, was awarded as the most engaging celebrity on Instagram.

Kohli-led Royal Challengers Bangalore had a horrid time at the ongoing edition of the Indian Premier League (IPL) as they finished at the bottom of the points table and won the wooden spoon. Now, the 30-year-old would be gearing up to lead India at the upcoming World Cup slated to be held in England and Wales from May 30. 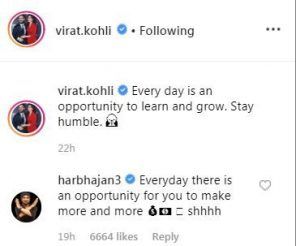 On Thursday, Atishi accused the BJP Lok Sabha candidate of distributing pamphlets containing obscene remarks about her, but his former teammates stood firmly behind Gambhir.

“Shocked to hear about yesterday’s developments. Having known @GautamGambhir for nearly 2 decades, I can vouch for his integrity, character and the respect he has for women,” Laxman tweeted on the micro-blogging site.