Headingley: Two days to go and England are right in front. While rain robbed India of a win in the first Test at Trent Bridge, at Headingley – it could be a blessing for the visitors. The weather predictions are that it would be cloudy and overcast for the first three hours and then the Sun would be out. The plaudits have already said that as the game progresses, the pitch gets easier to bat on. The temperature would be around 18 and 21 degrees Celsius with the humidity mostly in the low-50s. The wind will blow it around 9 kmph.Also Read - IPL 2021: Gautam Gambhir Criticises Ravichandran Ashwin, Feels DC Star Should Stick to Off-Spin 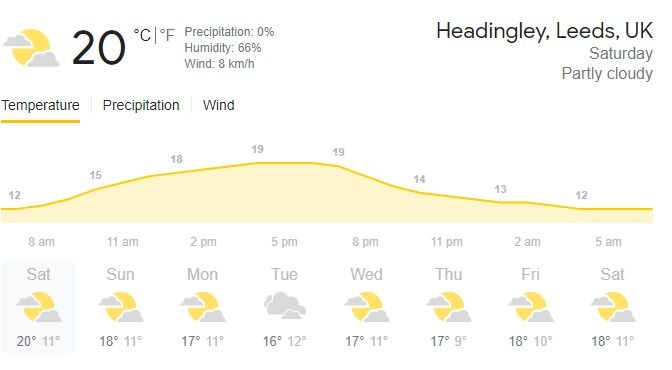 Meanwhile, Cheteshwar Pujara, who has not been in the best of form, played one of his most aggressive knocks as the Indian middle-order showed plenty of resolve to reach 215 for two and keep the third Test against England alive with two more days remaining. This was India’s reply after England scored 432 in the first innings to take a mammoth 354 runs lead. With Pujara batting on 91 and captain Virat Kohli 45 not out, India still trail England by 139 runs with two days left in the match. Pujara, who has been pilloried of late for his ultra-defensive approach and castigated for not showing enough “intent”, smashed 16 boundaries in his 91 not out off 180 balls on day three. Also Read - Virat Kohli Has Extended Net Session Ahead of RCB vs CSK; Coach Mike Hesson Says 'He's Desperate to do Well'

On Day 4, it will be a different challenge altogether when England takes the new ball. Pujara and Kohli would know they would have to start afresh. All the English pacers would be fairly fresh as the spinners did most of the bowling in the last hour yesterday. The first hour would be crucial for both teams. While India looks to not concede a wicket, England would want to make innroads. Also Read - IPL 2021: Rohit Sharma Ahead of MI vs KKR - 'It Will Not be a Cakewalk'