While the Indian team received ₹2100 for the final in 1983, it has been learnt that for the rest of the matches the team only received ₹1500 as match fees and ₹600 as daily allowance.

New Delhi: With the movie ’83’ based on India winning the 1983 World Cup set to release on December 24 (today), it might come as a surprise to many but the Indian World Cup-winning team led by Kapil Dev got only ₹2100 as remuneration for doing the unthinkable, according to several reports in the media. It has been almost 38 years since India became World Champions beating the mighty West Indies at Lord’s and life seems to have come a full circle for the 83 team, the real heroes behind the biggest upset in the history of the game.

Poetic justice, if we may call it but Kapil Dev and his men quite deservingly have got paid a hefty sum for giving the nod of making a movie out of their World Cup-winning campaign. The captain of the team, Kapil Dev has reportedly been paid ₹5 crore for the movie with the rest of the team getting ₹10 crore for the film.

FROM THE Archives| Directed by Kabir Khan, the movie -1983-is based on Indian cricket team’s World Cup victory in 1983. We bring you real 1983 team meeting then Prez of India Giani Zail Singh at Rashtrapati Bhavan. Courtesy: @RBArchive #83TheFilm #Thisis83 #India #KapilDev pic.twitter.com/wStSvDe71c

Kapil Dev drinking from a bottle of milk after winning the 1983 World Cup has to be one of the most iconic celebrations in international sports. #KapilDev @ICC pic.twitter.com/apvDPJ1PzF

While the Indian team received ₹2100 for the final in 1983, it has been learnt that for the rest of the matches the team only received ₹1500 as match fees and ₹600 as daily allowance. It was only after legendary singer Lata Mangeshkar arranged a concert for the World Cup-winning team, that the players got some kind of financial benefit for becoming the Champions of the World. 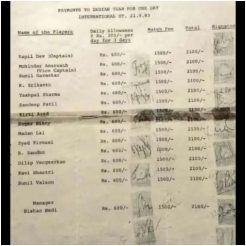 The duration of the movie is 2 hours and 32 minutes and it has all the making to be an absolute blockbuster. The lead character in the film is being played by Ranveer Singh who will be playing the role of Kapil Dev on screen.