The 32-year-old had skipped the 2017 event to give birth to her first child. “To be standing here as world champion again after having my baby, I am elated,” Fraser-Pryce, a two-time Olympic champion, said after a stunning performance. “The females keep showing up. We love to put on a performance and for me I am just really happy to come away with the win.” Also Read - IAAF World Athletics Championships 2019: Indian 4x400m Mixed Relay Team Finishes 7th 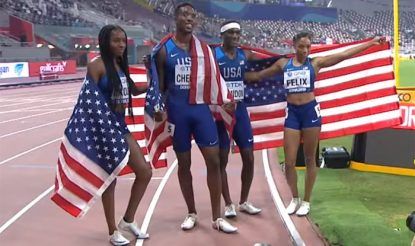 Allyson Felix of USA smashed Usain Bolt‘s record to claim her 12th gold medal at the world championships. The 33-year-old clinched the gold medal in the 4X400m mixed relay event as United States won with a world record timing of 3min 09.34sec.

Felix, who also took a break to give birth to her daughter Camryn last November, has now astonishing 26 medals that include six Olympic gold medals.

“So special, to have my daughter here watching means the world to me,” Felix said afterwards. It’s been a crazy year for me.”

Felix later revealed how she has been in touch with Fraser-Pryce. “We’ve talked a lot this year and been there for each other,” Felix said. “She’s been an amazing support. I’m just thrilled to see her back on top and better than ever, and I hope that is an inspiration to others. I know that she’s an inspiration to me.”