The weather forecast for London on Sunday predicts slight drizzle which might lead to few interruptions during the match.

India vs Australia ICC World Cup 2019 Match 14 weather report: India and Australia are all set to lock horns against each other at the Kennington Oval in London, on Sunday. Into the second week of ICC World Cup 2019 and the tournament has already witnessed few rain-interrupted and one abandoned match. Given the unpredictability of English weather, the situation is unlikely to change during the remaining course of the mega event.Also Read - Women's World Cup 2022: Australia Enter Semifinals With Six-Wicket Win Over India

However, during the much-awaited clash of India and Australia, the fans will not be disheartened as rain is not expected to ruin the match completely. The weather forecast for London on Sunday predicts slight drizzle which might lead to few interruptions during the match. The highest chance of rain is at around 2:00 PM when the players would most probably be in the dressing room for the break. But, it is expected to rain heavily in London from Monday to Thursday. Also Read - Highlights IND vs WI 3rd T20I Match: India Whitewash West Indies 3-0 in T20I Series 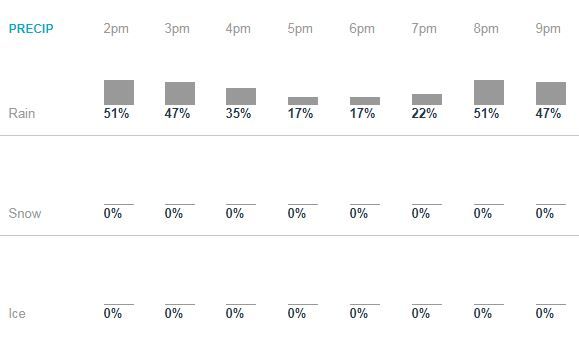 The weather forecast shows a 52% chance of rain at 2 PM.

Both India and Australia will look to resume their one of the most storied rivalries on cricket’s biggest stage at the iconic Oval. India’s six-wicket victory in their campaign opener against depleted South Africa was a clinical effort. While Australia, who have raised their game in the last couple of months, were professional against Afghanistan and brilliant in their come-from-behind victory against the West Indies.