The opening match will see India and New Zealand lock-horns at the Guyana National Stadium.

ICC has announced the schedule of the upcoming Women’s World T20 fixtures. The tournament kicks-off in West Indies from 9 to 24 November. The opening match will see India and New Zealand lock-horns at the Guyana National Stadium. Also Read - After World T20 Controversy, Harmanpreet Kaur Wanted to Take Break From International Cricket

But the big match where India take on arch-rivals Pakistan will take place on November 11. It starts at 11 AM. Also Read - Australia vs England ICC Women's World T20: Mitchell Johnson to Shane Warne, How Twitter Praised Southern Stars After They Beat England to Clinch Record Fourth Title

ICC Women’s World T20 Tournament Director, Jennifer Nero: “The West Indies is one of the great places in the world for sports, entertainment and culture. Cricket is the heartbeat of the West Indies and we want to show case all these offerings during the tournament. It will be fast-paced, exciting and action-packed with lots of enjoyable moments. This is the Year of the Woman, and the world’s top teams will be coming.” 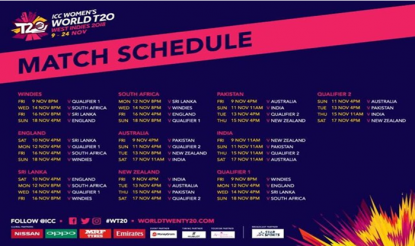 “I want to urge the fans to come out and see the best players in the modern game. Women’s cricket is growing at a rapid rate as we saw from last year’s ICC Women’s World Cup in England, and teams are getting stronger. Here in the West Indies, we are committed to playing a major role in the continued growth and development of the sport. We want to invite the cricket world to be part of this exhilarating world-class event on and off the field.”