If the ICC World Cup 2019 witnesses an uninterrupted game between Australia and Pakistan, it will be the first match in three days to not be disrupted by rain.

Australia and Pakistan are set to face each other in match 17 of ICC World Cup 2019 at the Cooper Associates Ground in Taunton on Wednesday. However, the weather forecast rings an alarm bell as it predicts rain will interrupt another match in the ongoing World Cup.Also Read - Money Talks, Nobody Would Say no to India: Usman Khawaja on Teams Pulling Out of Pakistan Tours

Like the past two-three days, the forecast has not pleased the cricket fans as the chances of a downpour are high throughout the day, starting from 9 AM in the morning. With the match slated to start 10:30 AM local time, the Met Office has predicted 57% chance of rain from 11 AM to 2 PM. Following that, almost an above-50% chance of rain has been predicted throughout the day. Also Read - Shoaib Akhtar Recalls Sledging Incident With Mathew Hayden, Says Australian Opener Started Crying After Failing to Perform 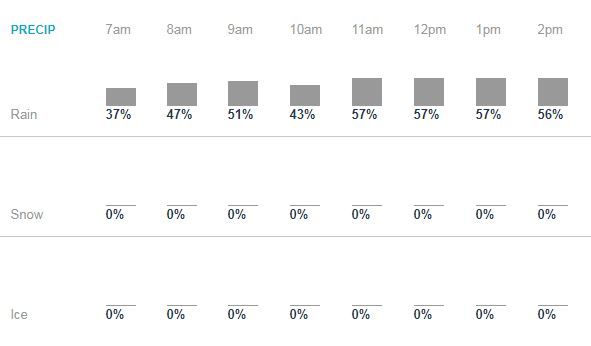 Fortunately, even if the ICC World Cup 2019 witnesses an uninterrupted game for the first time in three days, the conditions will be overcast with clouds glooming. The temperature is expected to stay between 12 to 16 degree Celcius, while the humidity will stay in the 70s and 80s.

The only game that this track hosted saw a batting-friendly wicket. However, with gloomy and overcast conditions expected today, the team winning the toss would like to bowl first. Also, if the DLS method comes into play, the team batting second will possess an added advantage over their opponents.

Australia played balanced cricket to win their first two matches before succumbing to defeat against India. They would want to get their campaigns back on winning track when they face Pakistan. Batting has not been an issue for them, but after a dominating performance against West Indies the bowlers failed miserably against India. The Aaron Finch-led side would be hoping their bowlers to get into the top gear.

“Every time you come up against Pakistan, you have to play your best to beat them.” #AUSvPAK PREVIEW ⬇️ pic.twitter.com/rEN632B74t

Pakistan, on the other hand, have already suffered a washed out match and are raring to take field against Australia. After suffering a heavy defeat against West Indies in their first match, the Sarfaraz Ahmed-led side staged an emphatic comeback against tournament favourite and host England. As they gained momentum, their next match was abandoned without a ball being bowled. Thus this match brings an added importance for Pakistan as they would not want to lose another playing opportunity.