This is not the first time the Rahul and Athiya Shetty have been seen reacting on each other's social media posts. According to the grapevine, the two are close friends.

Bollywood actress Athiya Shetty impressed with KL Rahul‘s heroics at Rajkot on Saturday took to Instagram and reacted with a heart emoji on the cricketer’s post. Rahul scored 80 off 52 balls at No 5 during the must-win second ODI against Australia. Not just Athiya Shetty, fans were also impressed as they lauded the Karnataka cricketer. Also Read - Rohit And Ishant Sharma to Miss First Two Tests in Australia, Also Doubtful For Remaining Two: BCCI Source

This is not the first time the Rahul and Athiya Shetty have been seen reacting on each other’s social media posts. According to the grapevine, the two are close friends. Also Read - India vs Australia: Shikhar Dhawan Flaunts New Retro Jersey, Twitterverse Reacts 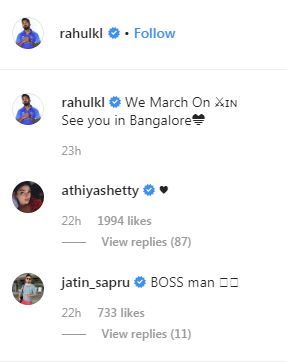 Not just with the bat, Rahul was also sharp behind the stumps with the gloves as he inflicted a stumping to bring an end to a 62-run stand partnership between Aaron Finch and Steve Smith. Finch had his leg on the line and had to make the long walk back to the pavilion.

We March On ⚔🇮🇳 See you in Bangalore💙

With the 36-run win at Rajkot, India levelled the three-match ODI series 1-1.

“I couldn’t have asked for a better start. Each day I’ve been thrown different roles and responsibilities and I’m enjoying it for now. Batting at 5, I wanted to give myself a few balls, you know what the wicket is doing and Virat said that it’s coming on nicely. A few came off the middle, and I was confident I could score, and everything else faded away. Glad I got some partnerships going and played my role to the best of my abilities,” said Rahul when he was awarded the Man of the match.