India captain Virat Kohli prepares the right pink ball questionnaire to trouble a spoilt-for-choice England in the upcoming day-night third Test starting at the newly-built Motera stadium on Wednesday. In the past, Ahmedabad as a cricketing venue has been witness to a lot of cricketing feats in Indian cricket — from Sunil Gavaskar’s famous late cut to complete 10,000 runs in Tests to Kapil Dev’s best bowling figures of 9 for 83 and also him eclipsing Richard Hadlee’s then world record of highest wickets. On Wednesday, Ishant Sharma joining Kapil as the second Indian pacer to play 100 Tests would add to the momentous occasion and Kohli scoring a hundred is just what the 55,000 odd spectators, who would be allowed in, might crave for.Also Read - Virat Kohli vs Sourav Ganguly: The Perfect Chaos For the World

The refurbished Sardar Patel Stadium looks colossal under lights but the first Test match in many years would mean that even the home team wouldn’t expect a lot of advantage. It would prefer a square turner to go 2-1 up in a high-stakes game but whether it actually gets one remains to be seen. As senior opener Rohit Sharma was clear in team’s choice of surface — a turner that helps Ravichandran Ashwin and Axar Patel just like Joe Root would have opted for a green top at the Headingley or the Old Trafford. There are a few more questions that would demand answers. How would the twilight period be for the batsmen as James Anderson feels that the ball swings more in that phase? Will the extra lacquer on the ‘SG Test Pink’ make it difficult for the Ashwin-Axar combo which wreaked havoc on the Chepauk snake pit? And with a 2:30 pm start, how much will the dew have a bearing during the final session? The ball would be difficult to grip at that point for slow bowlers and the pitch, despite grass being shaved off, might ease out with ball skidding off the surface. Also Read - Recent Happenings Won't Affect Brand Of Indian Cricket: Rashid Latif 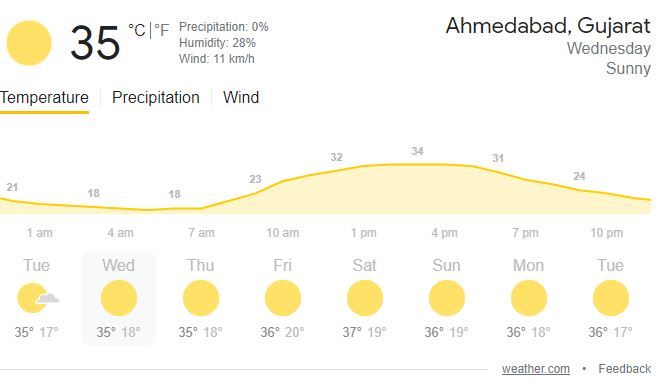 The weather in Ahmedabad is likely to be warm and sunnt on all five days. As per weather forecast website AccuWeather, the average temperature will be around 36 degrees celsius. While sunshine is expected to be hazy on the first three days of the Test, the remaining two days might witness plenty of sunshine. No rain is expected on any of the days, although the heat will be testing the players. Also Read - Rohit Sharma Fit to Lead India vs Windies; Bhuvneshwar Kumar, R. Ashwin Under Scanner As Hardik Pandya Back In Radar

With some grass covering over it, the Motera pitch for the third Test between India and England will likely offer some assistance to the quicker bowlers. However, spinners can also expect extract some purchase out of it. But it’s a still batting surface. The dew factor will definitely come into play in the night where the ball skids through the surface. Team Batting first will get a slight advantage in this Test.

What time will India vs England 3rd Test match start?

The India vs England 3rd Test will be a day-night affair and will be played using the pink ball. The match will begin at 2.30 PM IST – February 23. The toss between India and England will take place at 2 PM IST.

India need to win the series 2-1 or 3-1 to qualify for the World Test Championship final and a draw in the final game will be enough if the hosts win the day-nighter in Ahmedabad. There is plenty to play for both sides in the upcoming day-night Test. However, with momentum on their side, Virat Kohli’s men will start as favorites for the pink-ball Test.