India vs New Zealand, 4th T20I, Weather Report: The humidity is expected to be around 73 per cent.

With the series sealed in what was an epic third Twenty20 International against New Zealand, India will be out to experiment in the remaining two matches with the fourth T20I at the Sky Stadium in Wellington on Friday. Mohammed Shami and Rohit Sharma combined to pull off a thrilling win via a Super Over in the third game for a 3-0 lead and a maiden T20I series win on New Zealand soil. Also Read - Powerful 7.1 Magnitude Earthquake Strikes New Zealand, Tsunami Alert Issued

After the third match, captain Virat Kohli admitted that the think-tank will rest a few players and give a go to the youngsters. However, they have a rare chance to blank out a 5-0 sweep in this T20I series, thus etching out a slice of history. Also Read - India vs England, 4th Test: Axar, Ashwin Share Seven Wickets to Give Hosts The Upper Hand

Sanju Samson and Rishabh Pant are waiting for opportunities, with the former expected to get a look-in. So also are Navdeep Saini, Kuldeep Yadav and Washington Sundar, who are waiting in the wings. Expect one of Rohit or may be even Kohli to sit out in one of the next two matches. Also Read - Match Highlights India vs England 2021 4th Test Day 1: IND 24/1 at Stumps After Bowling Out ENG For 205

The final question would be over Jasprit Bumrah’s inclusion. While he had an off night in Hamilton, there ought to be thoughts about his workload. He is part of both the ODI and Test squads, and is a shoe-in for the T20 World Cup later on as well. 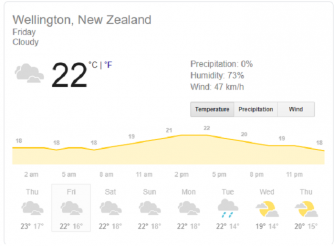 Weather report of the 4th T20I at Sky Stadium, Wellington.

The humidity for this match is expected to be around 73 per cent with minimal to negligible chances of rain expected.

Compared to Eden Park and Seddon Park, the Sky Stadium is known not to assist batsmen. However, the pitch has improved of late.