India vs New Zealand, 3rd T20I, Weather Report: The humidity is expected to be around 68 per cent, it would be overcast with chances of scattered rain, which fans would hope does not affect the match.

After taking a 2-0 lead in the ongoing five-match T20I series against hosts New Zealand, Virat Kohli-led India will look to seal the series at Hamilton in the third game on Wednesday. The visitors have on both occasions won the game while chasing, something they are comfortable at. On the other hand, the hosts will look to bounce back and keep the series alive. Also Read - Amazon Prime Bags Rights to Live Stream New Zealand Cricket in India For Six Years

It would be interesting to see if India stick to the winning combination or make changes in their XI. In case India is looking to change, in all likelihood, Navdeep Saini could be brought in the side in place of Mohammed Shami or Shardul Thakur, who have been expensive. Also Read - Kane Williamson Opens up About His Bromance With Virat Kohli, Says Fortunate to Have Played Cricket Alongside India Captain 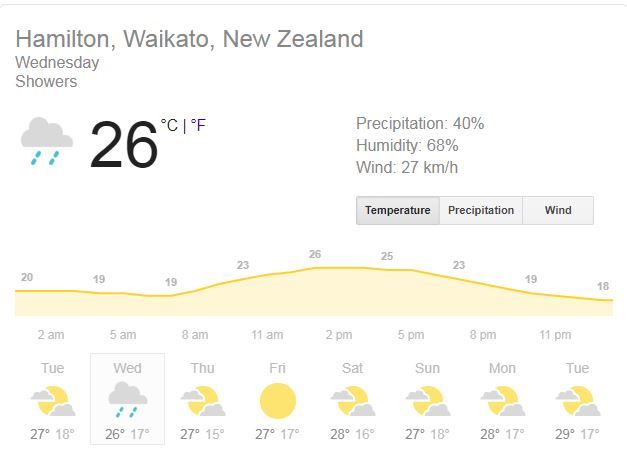 The humidity is expected to be around 68 per cent, it would be overcast with chances of scattered rain, which fans would hope does not affect the match. Also Read - When Mohammad Azharuddin Hit 62-ball Hundred in an ODI vs New Zealand 31 Years Back, Says 'Everything Clicked For Him That Day'

Compared to Eden Park, Seddon Park is going to be a bigger ground. At Seddon Park, there has been a total of none matches played and the team batting first has won five of them. The average score batting first is 177.