On Tuesday, during the third and final ODI against New Zealand at Bay Oval, Mt. Maunganui, Chahal was India's best bowler as he picked three wickets for 47 runs in 10 overs.

Not long ago, England women opening batter Danielle Wyatt posted a picture on her Instagram account where she was playing the slog sweep in the nets. India leg-spinner Yuzvendra Chahal responded to that post with a cheeky comment that read, “666666”. Also Read - ODI Series Defeat Not Something Too Serious to Ponder Over: Yuzvendra Chahal

Wyatt, got one over the Indian, with a witty comeback. Also Read - India vs New Zealand: Harbhajan Singh Wants to See Both Kuldeep Yadav And Yuzvendra Chahal in India Playing XI For 2nd ODI vs New Zealand 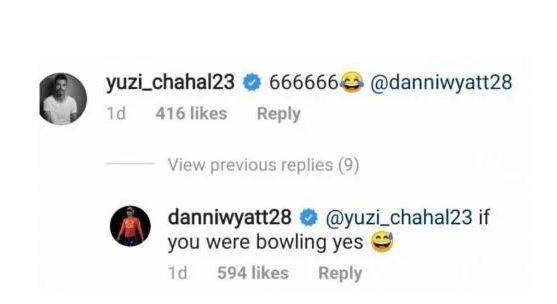 On Tuesday, during the third and final ODI against New Zealand at Bay Oval, Mt. Maunganui, Chahal was India’s best bowler as he picked three wickets for 47 runs in 10 overs. After the match, the wrist-spinner took to Instagram and posted a series of pictures of him during the match.

Chahal picked the wickets of NZ opener Martin Guptill, skipper Kane Williamson and allrounder James Neesham and gave India a glimmer of hope, but unfortunately, the tourists lost the match by five wickets to suffer a 0-3 whitewash –  their first such defeat in 31 years.

ALSO READ: ODI Series Defeat Not Something Too Serious to Ponder Over: Yuzvendra Chahal

“They (New Zealand) have played quite extraordinarily in this series. So we need to appreciate that. Poor fielding happens at times. Once in 10 series it happens, we have time until the next ODI series. We have seen what are the shortcomings and we have enough time to work on it before the next series,” said Chahal after the match.

It was also the third time in their history that India have suffered a whitewash in a series of three or more ODIs.