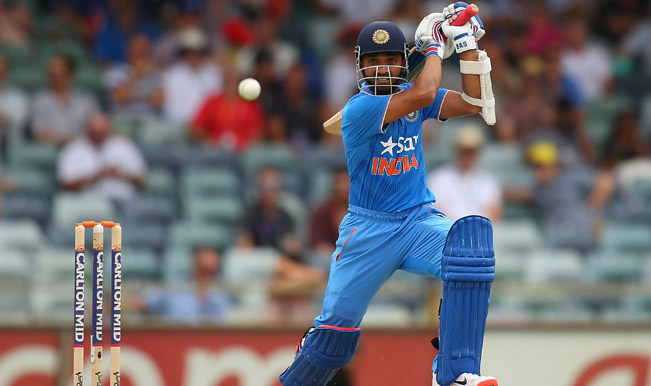 Yet again, the Indian batting line-up collapsed against some disciplined bowling by England as they are bowled out for 200 runs in the sixth One-Day International (ODI) match of the Carlton MID tri-series at the Western Australian Cricket association (WACA) Stadium in Perth on Friday. Watch the Free Live Streaming of India vs England, 6th ODI here Also Read - SA vs IND: BCCI Announces India Squad For South Africa Tour; Ravindra Jadeja, Shubman Gill, Axar Patel Miss Out Due to Injuries

Earlier, England skipper Eoin Morgan won the toss and elected to field. There was good bounce in the pitch, but the pace was slow. Ball wasn’t coming on to the bat easily, making shot-making difficult. However, openers Ajinkya Rahane and Shikhar Dhawan did well to negotiate the early period of play, putting on 83 runs for the first-wicket partnership. Catch the revised schedule of the India-Australia-England tri-series here Also Read - India Surpasses Brazil to Become No. 1 In Food Supply To Arab Nations In 15 Years

However, with the fall of the first wicket began the batting collapse. Within 90 runs, India was down to its No 10 and No 11 batsmen – Mohit Sharma and Mohammed Shami. Even as the bowling was nothing exceptional, poor shot-making and the slow nature of the wicket made matters worse for the Indians. The batsmen failed to get accustomed to the slow-natured pace of the wicket.